Take a pilgrimage with Steve and Janet Ray! 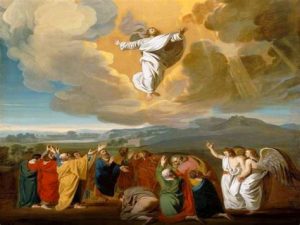 Since we are on the Mount of Olives TODAY for the Feast of the Ascension, I thought it would be good to share this bit of information from the actual site of the Ascension.

The Ascension always falls on a Thursday, 40 days after Resurrection Sunday. Then 9 days of praying in the Upper Room (1st Novena) and on the 50th day from the Resurrection the Holy Spirit fell on Pentecost. Pentecost means “the fiftieth day.”

One of our past pilgrims wrote to me expressing an apparent contradiction in the Bible about what I had said in Israel. The wording in the two verses below is what caused the confusion.

Acts 1:12  “[After the Ascension] they returned to Jerusalem from the mount called Olivet, which is near Jerusalem, a sabbath day’s journey away.”

Luke 24:50–51  “Then he led them out as far as Bethany, and lifting up his hands he blessed them. While he blessed them, he parted from them, and was carried up into heaven.”

So, did Jesus ascend into heaven from the Mount of Olives or from Bethany? 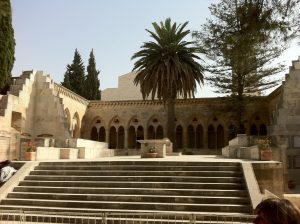 On pilgrimages, I take my groups to the top of the Mount of Olives to the Church of Pater Noster (the “Our Father”) where Jesus taught his disciples to pray in “the Grotto of the Teaching” — a cave beneath the front of the church. It is here that the oldest traditions inform us that Jesus was raised into heaven. Here Constantine built a church in the early 300’s. Here we celebrate Jesus’ departure and pray the Rosary’s 2nd Glorious Mystery of the Ascension.

There is a Muslim mosque five minute’s walk away (called the Chapel of the Ascension) that most Protestants visit but I don’t patronize Muslim sites and don’t accept this as the authentic place of the Ascension.

No one knows the exact square inches where his feet left the ground. But the Church of Pater Noster has the oldest tradition, is on the Mount of Olives and very near Bethany.

However, I can’t do that with groups anymore because of the big wall that keeps us from walking from the Mount of Olives into Bethany. 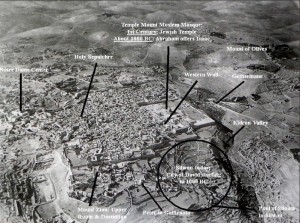 The picture shows that even until the turn of the 20th century there was nothing outside the old walls of Jerusalem. That meant there was just trees and open space between Jerusalem and Bethany. Bethany, though not seen on this map, was on the Eastern slope of the mount.

The other two maps show the proximity of Bethany, the the top of the Mount of Olives and the short distance from the walled city of Jerusalem. Luke wrote both the Gospel of Luke and the Acts of the Apostles.  He obviously saw no contradiction in referring to both places as the general location of Christ’s ascension. 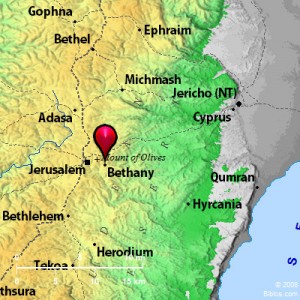 It is easily explained this way. First, some suggest that he went as far as Bethany to say good-bye to the family he loved – Lazarus, Mary and Martha, then came back to the top of the mount and departed to heaven. However, there is no need to stretch things that far. Being on the eastern slope of the mount, Bethany is virtually on the Mount of Olives, especially from the perspective of Jerusalem.

If someone asks me where I’m from, I always say “Detroit.” But those who have been to my house know I really live 40 miles east of Detroit in Ypsilanti. But since no one knows where Ypsilanti is – I say “Detroit.”

If there is nothing but trees and bare land on the Mount of Olives and you’re heading east from Jerusalem, people would say you are going to Bethany. Jesus left Jerusalem and went over toward Bethany to ascend into heaven. 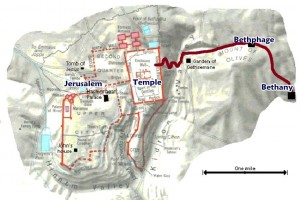 So if the geography is understood there is no conflict. Scripture can be trusted.

One of my favorite days with rich sites and flavors. The Mount of Beatitudes for Mass is always very special and hard to get people to leave. Then an  hour drive to the Lebanese border in northern Israel to see Caesarea Philippi during which our priest tells his vocation story. At “the rock” I give my talk “Peter, the Rock, the Keys and the Chair.”

Lunch at a Druze restaurant before stopping at the Syrian border to overlook a country that has been devastated by radical Muslim groups Isis and the Nursa Front. We discuss the situation in the Middle East.

Then back to the sea to Tabgha where Jesus multiplied loaves and fish and then on to Primacy Of Peter where Jesus appointed him to be the shepherd. The day concludes with dinner at one of the finest restaurants in Israel called Magdalena.

What If Your Parents Were Morons?

On the first day of school, young Lucy took her seat in science class. The teacher began to explain why there was no God and why she was an atheist. The students all listened carefully. At the end of the class the teacher asked how many of the children wanted to be atheists like her.

Not wanting to contradict the new teacher all the students raised their hands — except Lucy. The teacher said, “Lucy, why didn’t you raise your hand?” Lucy responded, “Because I am not an atheist and never will be. I am a Christian.”

Lucy thought for a moment and then said, “I’d probably be an atheist!”

6 Common Pro-Roe Arguments (and how to refute them)

With the end of Roe vs. Wade expected any moment, the radical pro-abortion rhetoric has stepped up. It seems like everywhere you turn, angry Leftists

The Pro-Life Cover of Life Magazine in 1965 – WOW, times changed for the worst!

Earlier I posted comments and two discussions related to Patrick Coffin’s assertions regarding his thoughts on Pope Francis being an antipope. Here is a follow-up

A Most Stunning Apse and Altar – thanks Fr. John Riccardo!

I visited my daughter Emily‘s parish today with my wife Janet and Emily’s three grandkids and her husband Sean. I was again moved by the

Another Protestant (Wesleyan) Pastor resigns to Join the Catholic Church

Proud of My Grandson Damian and his Theological and Insightful Poem

Our grandson Damian Augustine Brown wrote and delivered a poem for his Thomistic Philosophy class at their home school co-op St. Augustine classical education. I

Read More »
Our group with Latin Patriarch in Jerusalem
Our team in Israel
Pilgrim Anthony with my book at Caesarea Philippi
Grandson James practiciing Mass
Our group to Italy
With Teresa Tomeo in Assisi
Wisconsin Shrines with Cardinal Burke
"Love Being Catholic" conference
Guest for our pilgrimage and conference
Sunrise over Galilee
Full house in Des Moines Iowa
Speaking to 800 men in Oklahoma City
Great Christmas Gift! 15% Discount and Free Shipping
Check out Catholic Bible Study Software
Our April group in Jerusalem

“If in 1,800 years we clergy have failed to destroy the Church, do you really think that you’ll be able to do it?”

Looking forward to it Teresa! Always love working with you.

Please join me & @JerusalemJones for an amazing #pilgrimage June 14-22, 2022 to #Munich, #Zurich, & beautiful & sacred sites in #Milan & #Rome. See the once in every 10 yrs #Oberammergau Passion Play & SO much more! This is a trip not to miss! #Catholic https://t.co/jb15rZpexT

What If Your Parents Were Morons? https://t.co/NjnHDfcR3Z

Up the Mountain of Transfiguration, Renewal of Wedding Vows in Cana and Remarkable Nazareth! https://t.co/3N7xG8jOBR

Arrivals into Israel and Mass at Shore of Galilee https://t.co/r8MuDOAwLx

My Favorite Picture/Painting of the Jewish St. Paul the Apostle https://t.co/d7wvIkplUH

Debunking the Liberal Left’s Creed: Al Kresta at his Best in only 11 Minutes https://t.co/40Ml51VWCk

Good to be back in Jerusalem awaiting our 52 pilgrims at Notre Dame. No vaccine or testing requirements! Lovely to find no crowds or lines. The “5th Gospel” is open and ready for reading! Join us in September, November (with Jordan) or December.(https://t.co/pchBfG5h0M)

@ArchCordileone God bless you! We need other bishops to stand with you! Thanks!

@RevChuckCurrie @ArchCordileone Pastor means Shepherd. Can you imagine a shepherd encouraging his sheep to kill their babies out in the field before they’re born? What Shepard and all the history of the world would ever do that. And you call yourself a shepherd?

After numerous attempts to speak with Speaker Pelosi to help her understand the grave evil she is perpetrating, the scandal she is causing, an the danger to her own soul she is risking, I have determined that she is not to be admitted to Holy Communion. https://t.co/l7M85CyG86

Will my Mom be with Dad in Heaven? Will They Know and Love each other in Heaven? https://t.co/ofYKen1nc9

Yesterday we buried my Mother https://t.co/bvqV1maWvq

6 Common Pro-Roe Arguments (and how to refute them) https://t.co/oEMmHNSLFT

Agreed Ed! It was revolutionary; and now look how far we’ve fallen with all of these nitwits who say they’re “following the science.”

@JerusalemJones I remember when this cover came out. It bowled me over. It bowled everybody over. It made me want to be a scientist for the next ten years. And it has served as a backdrop for pretty much any pro-life work I have ever engaged in since. For me, the picture worth a million words.