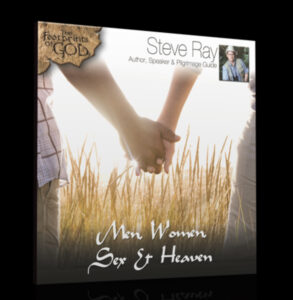 Today is Thursday, and I’m giving a talk on the Good News Marriage Cruise, sponsored by Corporate Travel and Ave Maria Radio. My talk is entitled “Men, Marriage, Sex & Heaven.”

It’s a talk that you can always hear a pin drop because Catholic speakers don’t generally talk about things like this AND in the way I’m going to be explaining it.

So, in honor of the talk today I am again posting an an article from Crisis Magazine which I love. I hope you enjoy it too!

My wife and I got married in the autumn after we graduated from college. We were both virgins. Our first son was born ten months later, and for the next fifteen years we had a child every two years or so.

They were more spaced out at the end, and by the time the dust settled in the early 2000s, we had ten children, six boys and four girls. For over two decades, my wife was either pregnant or taking care of a newborn or toddler—then she became a midwife and started taking care of other pregnant women and their newborns.

We started our lives as parents in the early ’80s of the last century, and our youngest leaves for college later this month. After almost forty years of raising kids, we’re going to be (more or less) empty nesters.

Neither my wife nor I played the field before we got married. Our alma mater, Hillsdale College, didn’t host sex fairs or encourage promiscuous experimentations (it still doesn’t). Neither of us has had an affair. By today’s standards, we’ve shared a boring, unsexy life.

That doesn’t bother us, because we’re convinced today’s standards don’t know what sex really is. We’re told to think sex is the experience of ecstatic passion when we lose ourselves in the intensity of our own, and our lover’s, pleasure. The orgasm subsides, we cuddle and talk (or not), and the sex is over.

That couldn’t be more wrong. No act is over when it’s over. As Maurice Blondel insisted, our actions escape our grasp, stretching beyond our purposes and desires toward completions we neither intended nor wanted.

Theoretically, we can distinguish acts and consequences, but in lived life they’re always inextricably joined. And that means following through on the surplus of our action is part of the action itself. We like it when the surplus is a plus: We enjoy being rewarded for results we didn’t anticipate.

We don’t like it when the results are dire. I run a stop sign while texting at the wheel, and I’m rightly held responsible for the damage I cause to another driver and his car. “I didn’t mean to do that” is meaningful, yet, whatever my intent, the action is still “reckless driving” and perhaps “vehicular homicide.” We finish our actions only when we own up to their consequences. Reward and cost are two facets of the same principle.

Our impulse to decouple sex from its aftermath is one of the deeply inhuman distortions caused by the abortion regime and the contraceptive mentality that infuses it. Technology and readily-available “solutions” bewitch us into believing we can engage in the most intimately personal human act without having to complete the act in an ongoing personal relation.

We’ve forgotten what sex is for. Yes, it’s for pleasure, and the pleasure is a good gift from our Father. Yes, it’s the most complete expression of the self-gift for which our spousal bodies were designed. But we’ve forgotten that, as Audrey Pollnow has recently argued, the possibility of conception is part of the “pleasure, as well as the excitement” of sex.

Sex acts that evade this fuller pleasure “are illusory, sentimental, and warping: They involve the experience of doing the babymaking act without actually doing it.” To shore up its collapsing legal clout, the abortion establishment has found it necessary to demonize the babymaking potential of sex.

Kat Rosenfield recently reported at UnHerd that abortion activists, doctors, and the media have conspired to give us “wall-to-wall coverage of the danger of pregnancy and childbirth.” The message is that “no woman in her right mind would ever carry a pregnancy to term unless she had some sort of death wish.” The abortion establishment rubbishes the sacrifices of giving life, while it mourns the lost freedom to take it.

Last December, our whole family gathered outside Atlanta for our youngest son’s wedding. As I wrestled and chased our grandchildren around the Airbnb, watched our sons play chess in a haze of cigar smoke, ate and drank, talked with children, grandchildren, and in-laws, I was overwhelmed by the sheer abundance that surrounded us.

Forty years ago, it was only my wife and me. Now there are an additional thirty-one human beings who would not exist but for us. The proliferation goes beyond mere numbers. It’s a proliferation of projects, plans, aspirations, achievements, gifts, and talents; of dinners, parties, songs; of teaching and learning, jokes and laughter, conversations and debates, worship and prayers, losses and tears.

My wife and I have given the world an attorney, a couple of teachers, more than one writer, a game designer, a musician and a couple of filmmakers, an executive assistant who runs a nonprofit, a social worker, husbands and wives, fathers and mothers, boys and girls with plans and aspirations that will come to fruition long after my wife and I are gone. Lord willing, Leitharts will keep proliferating for a thousand generations.

This is what the Bible means by “blessing,” and it all began with my wife and me keeping our promise to be “only for you.” We’ve lived the sexy life God created sex for.