Mary and Jesus More Closely Related than we may have Thought

“Microchimerism is the harboring of small numbers of cells that originated in a genetically different individual.

It has only recently become apparent that naturally-acquired microchimerism is common in humans.” (http://www.microchimerism.org)

The new scientific discovery of microchimerism informs us that some of the cells of the God-Man Jesus remained in the body of Mary. At his gestation and after his birth, Jesus left microscopic bits of his own divine cellular being inside his mother. Was Mary then a tabernacle of the Divine? Yes, not only during the pregnancy but also forever after.

Smithsonian Magazine informs us, “This cellular invasion means that mothers carry unique genetic material from their children’s bodies, creating what biologists call a microchimera, named after the legendary beasts made of different animals. The phenomenon is widespread among mammals, and scientists have proposed a number of theories for how it affects the mother, from better wound healing to higher risk of cancer.” 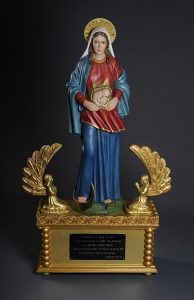 We speak of Mary being the Ark of the New Covenant. The Ark of the Old Covenant in the Old Testament contained 1) the Word of God inscribed on stone, 2) an urn of manna, and 3) Aaron the High Priest’s rod that budded (Heb 9:4).

Mary is the Ark of the New Covenant and in her womb was 1) the Word of God inscribed on flesh, 2) the real bread which came down from heaven, and 3) the real and ultimate, eternal High Priest.

But science now informs us that Mary was the Ark of the Covenant that carried God Himself not only for nine months but for the remainder of her existence. Mary was — and indeed still is — the Ark of the New Covenant and the repository of the Divine.

And now that science has discovered microchimerism, we realize now that May is perpetually the tabernacle of the Divine. As a Protestant, I thought Mary was non-essential and not important. Catholics made too big a deal of Mary. Boy, was I wrong. I love being a Catholic!

For more info, check out an Elizabeth Scalia article, and Wikipedia.