Was Jesus REALLY in the Tomb 3 Days & 3 Nights?

PrevPreviousDo the Gospels Conflict? How Long WAS Jesus on the Cross?
NextTens of Thousands Join Catholic Church in USANext 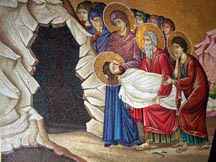 Was Jesus REALLY in the Tomb
3 Days & 3 Nights?

Skeptics claim to have discovered an error in the New Testament —claiming Jesus was not in the tomb for three full 24-hour periods like he prophesied. He was buried Friday afternoon and rose early Sunday morning.being only one full day and two nights. Has the sceptic found an error in the Bible? How does one respond?