Pastor Bob “Preaches the Word” (Discussing A Sermon on Baptism)

Pastor Bob Preaches The Word (or does he?)
By Steve Ray

Josh left Sunday services full of excitement, anxious to discuss Pastor Bob’s sermon with his sister Jennifer who had recently converted to the Catholic Church. The pastor had explained how salvation was by “faith alone” and not by rituals and works. He was anxious to discuss this with his sister; he was irked by her conversion to the “traditions of men” and “salvation by rituals.” How could she leave a Bible-believing Church to join the Catholics? Armed with Pastor Bob’s verses, he met his sister for lunch.

After ordering grilled salmon, Josh got right to the point. “Sis, I am dismayed that you have abandoned the Bible to follow Rome. Last Sunday Pastor Bob preached about Baptism right straight from the Word of God. I wish you could have heard him.” Jennifer smiled. Josh continued, “He showed how the Catholic Church ignores the Word of God.”

Josh pulled out his black leather Bible. “Baptism does not save you, Sis. Look at this verse.” After quite a few verses he turned to Genesis 15:6 which said that ‘Abraham believed God and it was credited to him as righteousness’. “Where do you see anything about Baptism?” After listening patiently for a while Jennifer interrupted the litany of out-of-context proof texts with a sisterly word of advice. 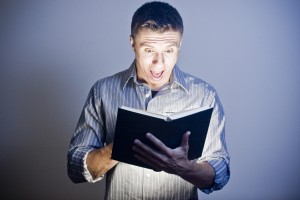 “You know Josh, you flip through that Bible with very little regard for the context. You treat the Bible as though it were a book of numbered quotations randomly collected and unrelated to each other. Did you know that the chapter and verse divisions were not part of the original text of Scripture?” Josh was more interested in finding the next verse than in listening to Jennifer.

“Remember Josh, even in Hebrews, when quoting the Old Testament the writer says that “one has testified somewhere, saying” (e.g., Heb 2:6) because there was no easy way of refer to the passage. The Old Testament Scriptures were written on huge scrolls that had to be unrolled-just straight text with no divisions. The New Testament writings were handwritten on papyrus or parchment. For more than 1500 years verse divisions, which we take for granted, did not exist.”

“Come on Sis, what does that have to do with Baptism? Verse numbers make it easier to use the Bible. I just gave you a lot of verses that prove my view of baptism, and you give me a history lesson.”

Jennifer smiled, “My point exactly Josh! Chapter and verse divisions have made it easier to abuse the Bible since people too often view the Bible as a collection of “sayings” divided numerically into bite-sized sound bits. You are a good example-just look at your list of proof-texts about Baptism. You treat the Bible as though it were a collection of unrelated, numerically arranged sentences to pluck out at will. The Bible is actually made up of whole writings to be read in context. Remember that ‘A text without a context is a pretext’. “

“Sis, let’s get back to Baptism. How can you believe that Baptism is necessary for salvation when the Bible says we are saved by faith alone? Read John 3:16 and you’ll see that ‘whosoever believes in Him should not perish but have everlasting life.’ Do you see anything about baptism in that verse? Only faith!”

“You’re right Josh, you cannot find the word “Baptism” in that particular verse. But are you willing to set aside the practice of “proof-texting” and look at the whole context? You don’t start reading Gone with the Wind in the middle of the book and then skip around willy-nilly reading individual paragraphs do you? Of course not! Then why misuse the Bible that way. Let’s stop for a minute and look at the whole picture-what is St. John saying in context?” 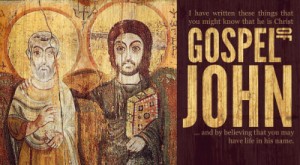 Josh protested, “Jennifer, I have more verses about salvation by faith without mentioning baptism than you have that mention Baptism.” “Really,” said Jennifer, “so you feel we can ignore verses-cut them out-if they don’t fit our theology to balance the verses that do? Come on Josh, that’s not honest. Jesus doesn’t divide it into either faith or baptism. as you do; rather, He proclaims salvation through both faith and baptism. Don’t divide what God puts together. Let’s take a look at what the New Testament actually says.”

Josh agreed and they sat for almost an hour reading the text of St. John and comparing it with the other New Testament writings. Fortunately for us, they took good notes which we are able to pass on to you. Let’s see what they discussed. 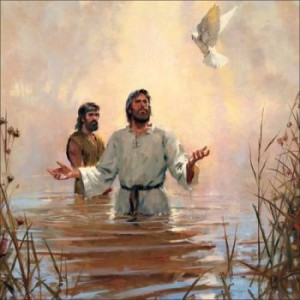 All of John: What had previously happened to Jesus that was still fresh on the mind of Jesus’ listeners and John’ readers (Mk 1:9-1; Jn 1:29-34)? How were “water” and “Spirit” involved in Jesus’ baptism? After speaking with Nicodemus about being born again through Baptism, what does Jesus begin doing immediately (Jn 3:26; 4:1)? What did “believers” in Jesus do to obey Him and be born again (Jn 4:1)? How does this “framework” of John three explain St. John’s meaning about being born again, believing, and being baptized? (For more on the context of St. John, see Crossing the Tiber.)

For more on this, see my article “Are You Born Again?”

Context from History and the Fathers and even Martin Luther

Tertullian (c. 160-c. 225)
“Happy is our sacrament of water, in that, by washing away the sins of our early blindness, we are set free and admitted into eternal life” (On Baptism).

Tertullian (c. 160-c. 225)
“Now this heresy of yours does not receive certain Scriptures; and whichever of them it does receive, it perverts by means of additions and diminutions, for the accomplishment of it own purpose; and such as it does receive, it receives not in their entirety; but even when it does receive any up to a certain point as entire, it nevertheless perverts even these by the contrivance of diverse interpretations. Truth is just as much opposed by an adulteration of its meaning as it is by a corruption of its text” (Prescription against Heretics, 17). 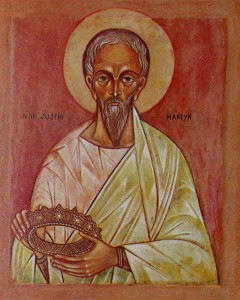 Justin Martyr (martyred AD 165)
“They are brought by us where there is water, and are regenerated in the same manner in which we were ourselves regenerated. For, in the name of God, the Father . . . and of our Savior Jesus Christ, and of the Holy Spirit, they then receive the washing with water. For Christ also said, ‘Except ye be born again, ye shall not enter into the kingdom of heaven’. . . . And for this [rite] we have learned from the apostles” (First Apology).

Origen (c. 185-254)
“Let us remember the sins of which we have been guilty, and that it is not possible to receive forgiveness of sins without baptism.”

Origen
“The Church received from the Apostles the tradition [custom] of giving Baptism even to infants. For the Apostles, to whom were committed the secrets of divine mysteries, knew that there is in everyone the innate stains of sin, which must be washed away through water and the Spirit.

St. Augustine (354-430)
“Who is so wicked as to want to exclude infants from the kingdom of heaven by prohibiting their being baptized and born again in Christ?” (On Original Sin).

Martin Luther
“This fountain might well and properly be understood as referring to Baptism, in which the Spirit is given and all sins are washed away” (Luther’s Works, ed. Jaroslav Pelikan [St Louis: Concordia, 1973], 20:331).

Martin Luther
“If the world last long it will be again necessary, on account of the different interpretations of Scripture which now exist, that to preserve the unity of the faith we should receive the Councils and decrees [of the Catholic Church] and fly to them for refuge” (Letter to Zwingli).

Catechism of the Catholic Church
“In order to discover the sacred authors’ intention , the reader must take into account the conditions of their time and culture, the literary genres in use at that time, and the modes of feeling, speaking and narrating then current· Be especially attentive ‘to the content and unity of the whole Scripture.’ Different as the books which comprise it may be, Scripture is a unity by reason of the unity of God’s plan·” (110, 112).