PrevPreviousWhy Visit Mexico? Why Visit Guadalupe? Is it Safe? Join us!
NextReally? The Pope has more important things to do ?!?!Next 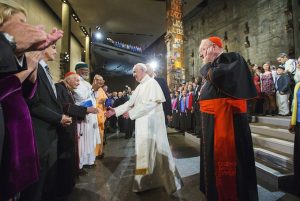 UPDATE Sunday morning:  Bishop Strickland of Tyler Texas responds to the letter below. A courageous Bishop… I hope other bishops follow his lead (write your bishop to do the same).

(Picture: Pope Francis greeting the perverted predator knowing what he was according to the letter below.)

UPDATE COMMENT Sunday Evening: This continues to grow and amaze. It is almost surreal. I think the dam has burst and the bubble has popped. Heads will roll. The Lavender Mafia – the homosexual conspiracy in the hierarchy – is about to come crashing down. Long live the Church which will survive every scandal and conspiracy!

I still love being Catholic and consider myself blessed to be a Catholic now, in this age, to see this revolution of change and reformation. This letter of Archbishop Viganò could go down as one of the great documents in Church history. 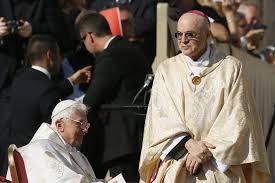 In an extraordinary 11-page written testament, a former apostolic nuncio to the United States has accused several senior prelates of complicity in covering up Archbishop Theodore McCarrick’s allegations of sexual abuse, and has claimed that Pope Francis knew about sanctions imposed on then-Cardinal McCarrick by Pope Benedict XVI but chose to repeal them.

Archbishop Carlo Maria Viganò, 77, who served as apostolic nuncio in Washington D.C. from 2011 to 2016, said that in the late 2000s, Benedict had “imposed on Cardinal McCarrick sanctions similar to those now imposed on him by Pope Francis” and that Viganò personally told Pope Francis about those sanctions in 2013. 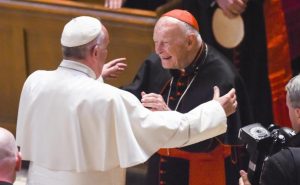 Archbishop Viganò said in his written statement, simultaneously released to the Register and other media, (see full text below) that Pope Francis “continued to cover” for McCarrick and not only did he “not take into account the sanctions that Pope Benedict had imposed on him” but also made McCarrick “his trusted counselor.”  Viganò said that the former archbishop of Washington advised the Pope to appoint a number of bishops in the United States, including Cardinals Blase Cupich of Chicago and Joseph Tobin of Newark.

Archbishop Viganò, who said his “conscience dictates” that the truth be known as “the corruption has reached the very top of the Church’s hierarchy,” ended his testimony by calling on Pope Francis and all of those implicated in the cover-up of Archbishop McCarrick’s abuse to resign.

On June 20, Vatican Secretary of State, Cardinal Pietro Parolin, on the order of Pope Francis, prohibited former Cardinal McCarrick from public ministry after an investigation by the New York archdiocese found an accusation of sexual abuse of a minor was “credible and substantiated.”  That same day, the public learned that the Archdiocese of Newark and the Diocese of Metuchen in New Jersey had received three accusations of sexual misconduct involving adults against McCarrick. Since then media reports have written of victims of the abuse, spanning decades, include a teenage boy, three young priests or seminarians, and a man now in his 60s who alleges McCarrick abused him from the age of 11. The Pope later accepted McCarrick’s resignation from the College of Cardinals. 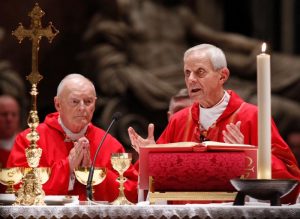 But Viganò wrote that Benedict much earlier had imposed sanctions on McCarrick “similar” to those handed down by Cardinal Parolin. “The cardinal was to leave the seminary where he was living,” Viganò said, “he was also forbidden to celebrate [Mass] in public, to participate in public meetings, to give lectures, to travel, with the obligation of dedicating himself to a life of prayer and penance.”  Viganò did not document the exact date but recollected the sanction to have been applied as far back 2009 or 2010.

Benedict’s measures came years after Archbishop Viganò’s predecessors at the nunciature — Archbishops Gabriel Montalvo and Pietro Sambi — had “immediately” informed the Holy See as soon as they had learned of Archbishop McCarrick’s “gravely immoral behavior with seminarians and priests,” the retired Italian Vatican diplomat wrote.

He said Archbishop Montalvo first alerted the Vatican in 2000, requesting that Dominican Father Boniface Ramsey write to Rome confirming the allegations. In 2006, Archbishop Viganò said that, as delegate for pontifical representations in the Secretariat of State, he personally wrote a memo to his superior, then Archbishop (later Cardinal) Leonardo Sandri, proposing an “exemplary measure” be taken against McCarrick that could have a “medicinal function” to prevent future abuses and alleviate a “very serious scandal for the faithful.” 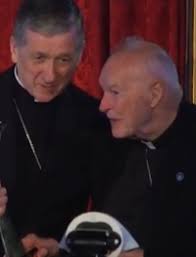 “…The appointments of Blase Cupich to Chicago and Joseph W. Tobin to Newark were orchestrated by McCarrick, Maradiaga and Wuerl, united by a wicked pact of abuses by the first, and at least of coverup of abuses by the other two. Their names were not among those presented by the Nunciature for Chicago and Newark….”

“…Francis is abdicating the mandate which Christ gave to Peter to confirm the brethren. Indeed, by his action he has divided them, led them into error, and encouraged the wolves to continue to tear apart the sheep of Christ’s flock.

In this extremely dramatic moment for the universal Church, he must acknowledge his mistakes and, in keeping with the proclaimed principle of zero tolerance, Pope Francis must be the first to set a good example for cardinals and bishops who covered up McCarrick’s abuses and resign along with all of them………..”

“When a light is aimed into a room full of rats, the rats scramble for cover. Former Nuncio to Washington DC (2011-2016) just wrote a bombshell letter to the Church, naming names, exposing conspiracy. Prelates are scrambling for cover today. He says the Pope should resign.”

“Imagine a car speeding down the sidewalk maiming people. What should we do? Rush to help the wounded? Yes! But immediately stop the car! Where are the good bishops to stop the car even if it’s driven by other bishops?”