PrevPreviousQuestions I Answered on Catholic Answers Live – “Keeping Your Kids Catholic”
NextMy talk “How Does a John Paul II Catholic Survive in a Pope Francis World?”Next 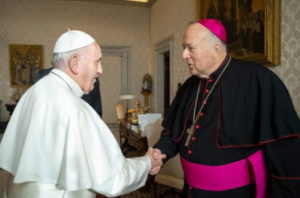 The Pope’s recent elevation of progressive and liberal Bishop McElroy of San Diego Diego California to cardinal sent many Catholics’ heads a spinning.

Since the Pope bypassed Archbishop Gomez of Los Angeles to raise Gomez’s “subordinate” McElroy, it seems the Pope is making a statement, preferring the very left-leaning political bishop and in so doing slapped the face of the American bishops and American faithful.

He suggests that the Pope has not only misunderstood American Catholics but even insutlted and slapped them. Here is his insightful article published by The Catholic Thing.

Although much has already been written concerning Pope Francis’s elevating Bishop Robert McElroy to the College of Cardinals, I believe a critical aspect of Bishop McElroy’s appointment is missing.  It appears to many that by bestowing a red hat upon McElroy, Pope Francis has slighted Archbishop José Gómez of Los Angeles, who is, after all, the shepherd of the largest diocese in the United States, a diocese that contains multiple ethnic populations and diverse cultures. Moreover, he is a man of authentic Catholic faith, upholding the conciliar and magisterial teaching of the Church concerning faith and morals.  He is esteemed among the American hierarchy – currently serving as the President of the United States Conference of Catholic Bishops.  Given these, and other credentials, it would seem that he meets the criteria needed to be a cardinal.  The fact that he has now been passed over by Pope Francis on a number of occasions gives rise to bewilderment.  Has Pope Francis insulted Archbishop Gómez?

Even if Pope Francis has his own defensible reasons for not elevating Gómez to the College of Cardinals, yet there are many other capable American bishops and archbishops from whom Francis could have chosen.  These prelates are, again, men of authentic Catholic faith who have boldly spoken out in promoting and defending the Church’s teaching, teaching that is vital to the present American cultural setting – evangelization, racism, immigration, abortion, gender theory, etc.  The question arises: Why were none of these men chosen by Pope Francis?  Is the passing over of these men also a not-so-hidden insult?

With regards to Archbishop Gómez and other bishops and archbishops of similar stature, it would appear, as some may conclude, that it is precisely their loyalty to the Church’s perennial teaching, especially with regards to its moral teaching, that disqualifies them from Francis’s consideration.  They bear the hallmarks of conservatism and traditionalism. And, therefore, they are incapable, in Francis’s eyes, of discerning the present working of the Spirit within today’s Church. …”

For the full article which is very worthwhile to read, click here.