PrevPreviousReally? The Pope has more important things to do ?!?!
Next“Defending Archbishop Viganò & Why We Stay Catholic” by George WeigelNext

“My family and I have discovered that the Catholic Church is the best-kept secret in all of human history.”

I recently had the opportunity to speak with Catholic evangelist Steve Ray. Since I am a high school theology teacher, I have long been impressed with what Steve has done for the Church; for instance, I have shown some of his “Footprints of God” videos to my students, who are justifiably spellbound by the remarkable imagery of the Holy Land. Steve, a reliably entertaining and informative Catholic media personality also has a website, “Defenders of the Catholic Faith,” and he is active on Twitter. If you would like to learn more about why Steve Ray embraces the Catholic faith as a proud and fearless disciple of Jesus Christ, you can find his books on Amazon or at Ignatius Press. May you be inspired by Steve’s testimony here.

1) What initially drew you to the Catholic faith, and how has Catholicism enriched you and your family’s life since converting

That’s a big question. I was born and raised an Evangelical Protestant. My parents were inspired by Billy Graham, and I grew up in that warm environment. I considered myself a Bible teacher. I became Catholic not necessarily because I saw anything beautiful in the Catholic Church at first, but when I was 39, I began to see three problems with Protestantism: 1) What was worship? 2) What is the authority that binds Christians? (We thought this was the Bible alone, but that would never work.) 3) How many Churches did Jesus start? (There was only one, per Matthew 16:18 and John 17.) We spent a lot of time contemplating these questions. Then, a good friend of mine, Al Kresta, converted to Catholicism in 1993. Al and I have been best friends since 1983. We home-schooled our kids and studied the Bible together. My wife and I told him that was the stupidest thing we ever heard — why would someone become Catholic? We started studying the Church Fathers to prove Al wrong, but instead, the Church Fathers kept proving the Catholic Church right! A year later, we became Catholic. 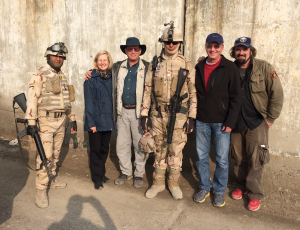 2) As a high school theology teacher, I have enjoyed showing some of your “Footprints of God” DVDs to my students over the years. What is your favorite site to visit in the Holy Land, and why?

Oh, my goodness. Well, we’ve been to so many different places. The favorite place that I have visited is Iraq. That is where it all began, with Abraham, who had even worshiped pagan idols (see Joshua 24:2). It was exotic there, but even dangerous; when we were there, ISIS was beginning to come in. It’s hard to get there, and hard to get out, and very difficult to be there, but it was still my favorite.

3) You have written various books – which was your favorite to write, and why?

That’s like asking which of your four kids you like the best. I like each book, but for different reasons. The one that has had the greatest impact is our conversion story, Crossing the Tiber. That was my first, and probably most impactful, of the books. Twenty years later, I am still getting emails from people telling me that that book made them Catholic, and I get a sense of humble joy from that. It’s actually selling more now than when it was written! 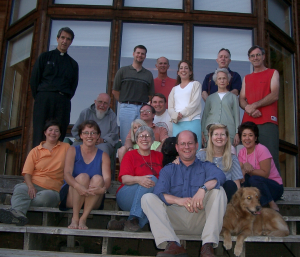 4) Ignatius Press is in the midst of celebrating its 40th anniversary. What have been some of the joys that you have experienced working with Ignatius Press as your publisher over the decades?

(Picture: With many Ignatius staff at 25th Anniversary)

They have been around for 40 years, and I have worked with them for 24 of those years. I would say their loyalty and top quality; everything is so thorough and meticulous, whether grammatically or theologically. They are a marvelous organization. They have really taken care of me and other authors, not only with books, but with DVDs and other media. They have given me free rein to make those movies, and God has a great sense of humor, in letting a former janitor do this, instead of somebody with a Ph.D.

5) If you were to meet someone who had never heard of Jesus, what would you say, in a paragraph or so, to convince him or her that Jesus Christ is the Way, the Truth and the Life (cf. John 14:6)?

I would start probably one step before that by telling the person that life demands an explanation: where did this come from? It wasn’t by chance; there had to be a designer. What kind of designer would this be? He would have to be perfect and loving. This God is so amazing that he came down and become one of us. He literally condescended; it’s the scandal of the Incarnation! The angels must have thought: what in the world is he doing? One should look at the big picture about why we are here, and it all points to Jesus Christ, the Incarnation of our redeeming God.

6) I always ask this of my interviewees: what is your favorite scriptural passage, and why?

One stands out, and it may be trivialized by sporting events and so forth, but it is John 3:16. That verse is a summary of the whole Scriptures, and of the heart and mind of God. That verse, in a few words, tells everything in a simple sentence. Everything is wrapped up in that one verse. I am proud to say that my mom gave me $0.50 for every verse that I memorized, and they are all in my mind today.

7) Any parting wisdom for our readers?

My family and I have discovered that the Catholic Church is the best-kept secret in all of human history. We see the humanity of the Church, but it is also, of course, a divine institution. There is no better place to be than in the heart of the Catholic Church, even with everything going on and some people making a lot of mistakes. It is the place where I will live for the rest of my life. I also want to thank Ignatius Press for all they have done, especially through their orthodoxy. Ignatius Press tries new things, such as the use of technology with making my movies. I wish them a good 40th anniversary, and I am glad to have been a small part of it.