“Why do you Catholics Believe Mary was Assumed into Heaven?” 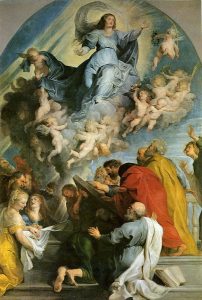 About twelve years ago a teen named Billy asked me this question, “Why do you Catholics believe that Mary ascended into heaven, when it’s not even in the Bible?”

He said “you Catholics” because he went to a local Bible Church but had been coming to a Life Teen Summer Bible Study with some of his Catholic friends.

“Well, first . . . ” I replied, “Mary did not ascend into heaven; the Blessed Virgin Mary was assumed into heaven. Jesus ascended by His own power. Mary was taken up into heaven by God.” That little difference is a big difference, so I wanted to be sure he understood it.

This is where the conversation got really interesting.

Maybe Mary didn’t die. Maybe she’s living in Brazil . . . next door to Elvis. Some people point to the fact that only Elijah and Enoch are mentioned as being carried off to heaven in Scripture, and since Mary is not, then “it must not be true.”

Have you ever noticed that although the Acts of the Apostles is an incredibly detailed accurate account of Sts. Peter and Paul, we do not read of their deaths on the pages of Scripture? Everything we know of their deaths comes from early oral tradition. In fact, the Bible doesn’t say what happened to most of the disciples. The Bible is silent in this area. Many Evangelicals accept the witness of Church history that Saint Peter was crucified upside-down in Rome, that Paul was beheaded, etc. — even though Scripture does not record these events.

We know, from oral tradition, that Mary was taken into the care of St. John (the writer of the fourth gospel and the Book of Revelation) and went to live with him in Ephesus (where he was a Bishop). We know that she was sought out for her counsel and wisdom and that she was exalted and honored throughout the community. Early Church Tradition upholds these facts as true, as do historic and non-canonical writings.

What is different, though, is that we know where the bones of Sts. Peter and Paul and other disciples like Mary Magdalene are because the early Christians took care of them. There is no record of where the bones of Mary are. It seems a little odd that if there had been a body no one would have given her a proper burial or that her tomb would not have become a landmark, does it not?

HOW DO WE KNOW MARY IS IN HEAVEN?

Well, if the woman who God specifically chose to bring His Son into the world and raise Him is not in heaven . . . none of us have a shot.

Seriously, though, is there Scriptural backing for this teaching about the Assumption? Absolutely!

While it does not explicitly state, “Mary assumed into heaven” in the Bible, stop and take a look at the verses from Revelation, written by John, of visions that were seen:

“Then God’s temple in heaven was opened, and the ark of his covenant could be seen in the temple. There were flashes of lightning, rumblings, and peals of thunder, an earthquake, and a violent hailstorm. A great sign appeared in the sky, a woman clothed with the sun, with the moon under her feet, and on her head a crown of twelve stars. She was with child and wailed aloud in pain as she labored to give birth. She gave birth to a son, a male child, destined to rule all the nations with an iron rod… Then I heard a loud voice in heaven say: “Now have salvation and power come, and the kingdom of our God and the authority of his Anointed . . .” – Revelation 11:19, 12:1-6, 10

This revelation is referring to Mary in heaven. Mary is often referred to as the new “Ark of the Covenant.”

Indiana Jones went searching for the Ark of the Old Covenant which contained the Ten Commandments (Law), a pot of manna (heavenly bread) and the staff of Aaron (symbol of Priesthood). You can read about the Ark – but not Indiana Jones – in Hebrews 9:4. The Ark was kept free from all defect and corruption, made from the finest most pure materials to God’s exact specifications.

As the Ark of the New Covenant, Mary carried Christ who is the Law, the Bread of Life, and the Royal High Priest. Her Immaculate Conception and her state as ever-Virgin kept her free from defect and sin, preserving her throughout her life, until her death where she was immediately assumed to preserve her from any bodily corruption on earth. Notice, too, in this passage from Revelation that we see the Ark (which is missing on earth) in heaven immediately preceding our vision of this woman crowned in stars and holding a baby.

Don’t forget – to whom did God give this vision (Revelation)? He imparted it to St. John, the one who was entrusted with caring for Our Mother, Mary (John 19:25-27) for the remainder of her days on earth prior to her assumption.

In 1950, Pope Pius XII defined the doctrine of the Assumption of the Blessed Virgin Mary for the universal Church. The teaching was not new – only now formally clarified. He affirmed that at the end of her time on earth, Mary experienced immediately the resurrection of the body that is promised to all faithful followers of Jesus.

Basically, since Mary was preserved from original sin by the unique gift of Christ’s grace, she was able to experience the immediate perfect union with her Son in heaven, never knowing, tasting or suffering from bodily corruption or decay (due to death) in any way.

Remember, as Christians we believe in the Resurrection of the Body. As the Papal encyclical Lumen Gentium (68) asserts, Mary’s assumption and heavenly presence preceded and foreshadows our own future glory (1 Corinthians 15). You might want to check out how the Catechism of the Catholic Church explains it, too (CCC 966).

One of the things that sets us apart as Catholics from Christian denominations is that we have a rich understanding of Mary and a tradition of giving her the honor she deserves. She can teach us a lot through her example of virtue and her special role within the Church. Pray with Mary and she will lead you into a far deeper relationship with Her Son than you could ever achieve by your own direction.

I’m reminded of that conversation with the teen every year around this Feast Day, only I no longer call that teen, Billy, my friend . . . now I also call him, Father Bill. He went looking for Mary and found her . . . in the Catholic Church.