White Supremacy, Black Power, to Islam, then the Road to Damascus: My Journey into the Fullness of the Christian Faith 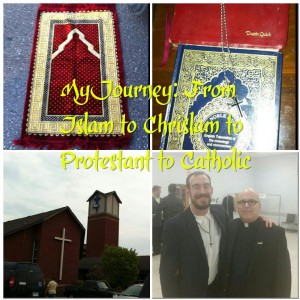 Follow Dustin through the phases of his life including Islam until he finally discovered the Catholic Church.

Maybe you’re like me (aside from being born with Cerebral Palsy and defying doctors’ pronouncements, by the grace of God, that I would be confined to a wheelchair and relegated to a vegetative state). Maybe you grew up in North America and lived a sheltered, comfortable life, and God was—although you would never say it, or consciously think it—there to do your bidding. You want a new pair of shoes? Ask God. Scared of an impending summer storm that could possibly turn into a tornado? Pray to God. Promise Him that, if this storm passes, and you and your family remain unscathed, you will try harder to be a “good person,” get to know Him more intimately, and go to church more often.

Well, those shoes you wanted? You got them. That storm you were afraid of, that could have destroyed your house and taken your family? It passed. Out of thankfulness, you kiss the gold cross around your neck. You go to church on holy days. And you even listen to your grandmother tell you about how Jesus has changed her life, and she couldn’t do life without Him, without His word. It sounds so foreign. If you were around other family members—much less friends—while she would bear witness to Jesus, you just . . . smiled . . . nervously, and tried not to be embarrassed. When I was a child, I reasoned as a child.

Maybe you’re like me. Maybe, when you entered college or university, a couple things happened: One, you were old enough to drink and go to bars with your buddies. Awesome. Two, the things you were taught about, well, everything, growing up—the things you took for granted about religion, history, life itself—began to be challenged. It was at this stage that I began to notice something: I was raised a “Christian.” North America was a “Christian” civilization.

How was it, that I, a Christian in a Christian county (Canada), could go to bars, even strip clubs, with a cross around my neck, with the aim of getting smashed, talking crudely about women, all while having no qualms about bragging that I had been saved. I was heaven-bound because Jesus died for me. I believed that. And that . . . was enough. (Or was it?) …