Three Tombs — We Take A Walk

I know of three tombs here in Jerusalem today that have proponents claiming they are the tomb of Jesus Christ. We visited two of them today and the third we could not find.

The “Jesus Family Tomb”
First the one we could not find. It is the supposed “Jesus Family Tomb” which is located about 5 km. from the Old City of Jerusalem in E. Talpiot. Titanic director James Cameron made it famous last Sunday in his “documentary” on the Discovery Channel. But let’s make something clear from the start—it was not famous everywhere or with everyone. It seems to be an American phenomena, because here is Israel no one knows where it is, no one cares, and it is seen as a joke.

We have tried many avenues to find it—calling on the phone, asking guides and taxi drivers, even calling the Franciscan protectorate. Nobody knows anything. We drove through E. Talpiot for over an hour yesterday asking the locals and no one knew anything about it or where it was.

I have read a lot about this tomb and it’s claim to fame seems to be more about Cameron and his sidekick Simcha Jacobovici’s desire to defame Christianity and make money than it is about serious archaeology. People here in Jerusalem have heard such nonsense before and they are not as easily shnookered as Americans seem to be. They haven’t given this phony "archaeology" even a moment’s attention.

We will try again tomorrow. My friend in university will ask his Jewish archaeology professor how we kind find this tomb, but we are not hopeful. For a few blogs on this visit here and here.

And, it looks like Discovery Channel is embarrassed enough for airing this trash that they  have pulled a second showing off the schedule and are dead silent about the first showing–what viewers called "archeo-porn." I hope they never live it down–the @#&* money grubbers. Read TV Magazine's review of their backing off here http://www.tvweek.com/news.cms?newsId=11681 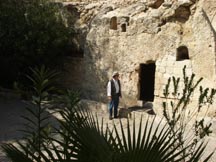 The “Garden Tomb”
Today we also walked along the walls of the Old City to the Damascus Gate, then we turned left on Nablus Road and walked through the street vendors for a quarter mile to the Garden Tomb. There we entered the “English Garden” surrounded by walls and build around an ancient quarry. In the 1800’s General Gordon from England saw what he thought looked like a skull in the face of a small cliff and decided that it must be the place of the skull (golgotha Hebrew for “skull”; calvary Latin for “skull”).There he found a tomb carved from rock in the cliff wall and decided it must be the tomb of Christ. Unfortunately if was believed by many unwary folks and became lovingly known as the Protestant Tomb. It is maintained by the Anglican Church and many Fundamentalists today swear it is the actual tomb of Christ.

The owners of the site are careful to avoid claiming too much. As I overheard the guide say today, “It may be the place where some historical events may have taken place.” In their literature they say no one knows where Jesus was really buried and it does not matter. It only matters that we believe he really did rise from the dead. Aarrgghh, I hate those kind of stupid comments. Of COURSE it matters!

You can see me in the picture standing in front of this tomb. I was telling my friends with me that this is NOT the tomb of Christ. Early Christians knew where Jesus was buried and the tomb of General Gordon and the Protestants has been decisively dated between the 6th and 8th centuries BC. Jesus was buried a newly hewn tomb. So much for the second fake tomb of our search today. If you want to read more, I have a good bit of info on this in my book St. John’s Gospel. 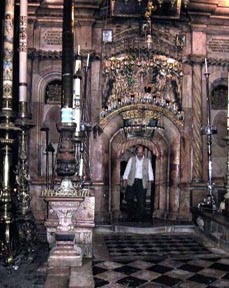 The Tomb in the Church of the Holy Sepulchre
Now to the third tomb—or more accurately, the first tomb. This is the tomb located in the Church of the Holy Sepulchre only a 10 minutes’ from where I am writing this blog now. Janet and I walked there again today—and we will lead our 100 pilgrims there in a few days. This is the tomb that has been venerated from the first centuries as the actual tomb of Christ.

(Picture: Steve coming out of the Tomb in the Church of the Holy Sepulchre)

The early Christians did not forget where their savior was crucified and buried. When Queen Helena came here around 325 she built a huge church over the site of Golgotha and the Tomb and it has been venerated by Christians and confirmed by archaeologists and historians over and over again. It IS the place!

The early Christians were no idiots—they knew and remembered and passed on the truth of Christ’s death, burial and resurrection for future generations. Not only did they know for sure it actually did happened, but they also knew WHERE it happened.

Once again, Janet and I stood in front of the tomb with awe and emotion—and a prayer of thanksgiving on our lips. “He is risen!”   “He is risen indeed!”