The Technology of Scripture Study: The Middle Ages (and a hilarious video at the end)

PrevPreviousIs Scripture Sufficient…
NextMary, Ark of the New Covenant & the Visitation to ElizabethNext

“I am an ecclesiastical historian by training and a Bible software guy by trade. Which, I think, puts me in the unique position to write about the history of the intersection of technology and Scripture study in a series of posts.” 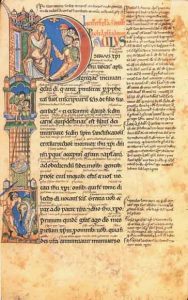 “We might start with a description of the Bible we are all used to. It is a stand-alone, printed volume of 73 books (give or take a few), with a more or less fixed text translated from the earliest and best manuscripts. Because of its size, its mass production, and the fact that nearly all of us are literate, we tend to think of the Bible as a self-contained work that is readily available and can be read by anyone and anywhere.

The Bible was a very different thing in the Middle Ages. That may seem like a bold statement, but let me explain.

Medieval Christianity was profoundly sacramental, focusing on an encounter with Christ that was both spiritual and physical.

As the theologians of the period frequently remarked, Christ was the Word of God in both His “doing and teaching” (Acts 1:1). For the medieval Christian engagement with the spoken Word of God was not divorced from physical engagement with Christ’s Body, and so the Bible was, above all else, a liturgical book. 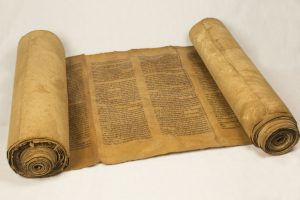 In the liturgy, the priest read the Scripture, brought the text to life through preaching, and then confected the Eucharist on the altar, introducing Christ’s physical presence. The Word of God in its totality was made present and the encounter with it was total: intellectual, physical, and social.

In the liturgy the Christian was understood as united vertically with God and horizontally with his fellow man—all together, the Body of Christ.

This was the context in which medieval Christians studied the Scripture. Indeed, they often evoked Eucharistic imagery. They “chewed” the Word and “swallowed” it. This was an act of deep reading and meditation on the text that culminated in memorization.

But they did not understand memorization as do we. We tend to think of the memory as a hard drive, and memorization as an act of rote drilling that leads to data retention. To the people of the Middle Ages, however, the act of memorization was that of “digesting” the Scripture so that it became a part of who they were.

For the whole article, visit HERE.

For a very funny video on Scripture study in the Middle Ages, watch this. Switching technology from scrolls to codex (books). I had tears in my eyes I laughed so hard.