The Ship & the Rafts: A Convert Looks Back at his Protestant Raft

Imagine that a king establishes a new country on the other side of the ocean. It is called the Celestial City and has streets paved with gold. To populate his new land, he summons the people and invites them to be citizens. Next, he builds a ship and prepares his chosen people for the long journey across the ocean.

The ship he provides is a large, beautiful ocean liner well-equipped with everything needed for the journey: food and water, showers with hot water, navigation charts, maps and GPS. He has ordained a captain and a crew and an engine with dynamic power to move the ship. The king invites many to join and soon the ship is full.

Everything needed to reach the new country can be found aboard that ship. The founder of this new country is God, the new country is heaven, and you and I are the ones he has chosen to join the voyage. The ship that He built is the Catholic Church, the captain is the pope, and the crew are the bishops, priests and deacons. The navigation charts and GPS are Scripture, the maps are Sacred Tradition.

The food is the Eucharist — the food for the journey. The water is the grace of baptism and the life that flows from Christ through the Sacraments. What are the showers? Confession of course. When we get dirty and soiled we need to be cleaned up. The power that moves the ship is the Holy Spirit. Everything we need to reach heaven can be found within the Catholic Church.

He warns the passengers before they commit, that there will be troubles along the way. Troubles from without and troubles from within. Storms will hit the ship and threaten to dash it to kindling wood. They will get so sick at times they may wish they had never come aboard the ship.

There will be problems within too. The captain and crew may not always conduct themselves as expected and some may even attempt to sabotage the ship, but he promises them boldly, that if they stay with is the ship he promises to get them to the other side.

Everyone agrees to go and he steps up to the bow and smashes the bottle of champaign with great solemnity and christens her the Catholic Church. The engines roar and fire is seen as he moves away from the port.

The journey goes well for the first 1500 years. There are some awful storms and waves and within there are debilitating intrigues and rebellions but in the end, the ship is always righted and still on coarse. There are some who fall overboard due to their own recklessness and disregard for rules. The ship is battered but remains intact and seaworthy under full steam by the powerful engine.

About halfway across the ocean some of the passengers start to argue and protest. Like the Israelites who grumbled about the manna in the desert, they begin to complain about eating the same food all the time. They ask, “Who is this captain, and why should he be in charge? Who gave these crew members the right to tell us what to do?” They stir up emotions and rile up some factions and instigate a mutiny.

The protesters go down into the belly of the ship where they find wood and rope, and they lash them together and build rafts. They collect food and water, clothing and anything else they can find, and throw themselves and their rafts over the side of the ship. Now they are free! No more captain, no more crew. Now, they are on their own to their own!

Instead of a single ship sailing through the sea, there are now 33,000 or more small rafts bobbing around in the water around the ship! Now this beautiful ship is surrounded by 33,000 rafts bobbing around it—each with its own self-appointed captain giving conflicting and contradictory orders. Rafts are crashing into each other, competing with each other for people to join their rafts.

As the ship continues toward heaven, some of the rafts remain close by, but others drift off into the distance, and some are moving in the opposite direction and have lost their way completely. Those rafts that are close to the ship are sheltered from some of the wind and waves; those farther away are tossed about during the storms. The farther away they are, the less chance they have to make it to the other side. 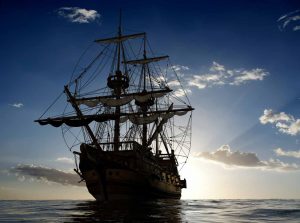 And here is a question for you. Everything good they have on their raft—where did they get it from? It all came from the ship, but now they are cut off. Eventually, the King’s food runs out, and the people begin to eat something other than what the king provided. There are no hot showers available for people to get clean.

(When I was a Protestant, I never realized that everything good that I had on my raft came from the Catholic Church. For example, the Bible was put together by Catholic bishops and copied and preserved by Catholic monks. Martin Luther even admitted that we wouldn’t have a Bible if it were not for “the papists.” My Protestant fellowship only had two sacraments, baptism and the Lord’s Supper, while the Catholic Church has seven. I did not define the faith, such as the Trinity. That was hammered out by Catholic Councils over the first 500 years of the Church.)

Then one day, I caught a glimpse of something large on the horizon and I had no idea what it was. I yelled out, “Hey, what is that on the horizon?” 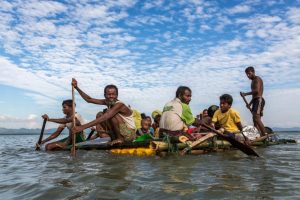 Those on my raft answered, “We don’t know!” So I yelled louder to nearby rafts and they responded over the waves, “We don’t want to talk about it.” “Why not?” I yelled. “Because it’s enemy.”

As I gazed upon the ship I thought to myself, “If the founder of the Celestial City had any sense, he would never have pushed 33,000 rafts into the ocean and expected them all to successfully make the voyage. He would have prepared a ship with everything needed for the voyage.

It dawned on me that that the founder of the country I was trying to reach had created the ship to carry me home safely. I began to ask questions and discovered from ancient documents that INDEED the founder had only chartered one ship and the rafts were all a result of a protest! 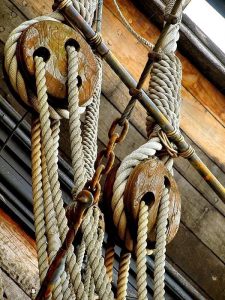 “Of course,” I thought. “Why would God create 33,000 rafts competing to ferry His people home?” After a year of paddling around the ship and looking up at it from every angle, and after much reading and researching and praying, I got back onboard the ship and pulled my whole family up with me.

I became a Catholic on May 22, 1994, and I’m amazed at what I have found onboard. Cradle Catholics may take these things for granted, but we converts are in awe. You have seven sacraments, and they work! You have navigation charts: the Scriptures and the Tradition that helps you make sense of the maps. You have a crew that understands how to read the maps and charts without error, how to prepare the food of the Eucharist properly, and how to operate the showers so that we can get cleaned up from all the foul-smelling sins we commit. You also have a captain, the Pope. There have been good and bad popes and clergy, but throughout history the Papacy has known how to navigate the ship! 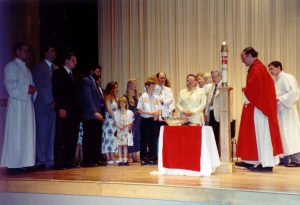 (Picture to the right: Our family getting on board the ship at Christ the King Catholic Church in Ann Arbor Michigan with Fr. Ed Fride on Pentecost Sunday, May 22, 1994)

So do I now want to shot canons at all the protest-ants out on the rafts? No! My mom and dad are out their and Vatican II reminds me that those who are baptized and recite the Creeds are my brothers and sisters in Christ though separated from the physical ship. Some of the people on the rafts can even sing better than the people on the ship.

No, I don’t want to shoot them. I have decided I will spend the rest of my life calling out to the people on the rafts, “Hey, you out there. I too was born on one of your rafts but I have discovered the fullness of the faith in this ship, the way the founder originally planned it. Problems, yeah! But the ship is great. Come rejoin us!”

And when I get a few minutes I turn around and look at the people on the deck. I say, “Why are you grumbling? Don’t you realize where you are?”