This quote was in today’s The Loop and Carl Olson is a good friend. Love his comments!

THE CHURCH’S ‘RICHES’  When a professional baseball player visited the Vatican, he complained about the opulence – the statues and artwork which he said could be sold to feed the hungry. “For it just to be sitting there I think is a crime,” he said. Carl Olson notes that “no other Christian group in the world operates as many charitable organizations, orphanages, schools, hospitals, hospices, and shelters as does the Catholic Church.” But Olson also adds: “And what about his multi-million dollar contract, paid for by fans coming to watch grown men throw and hit baseballs in huge, expensive stadiums?”  READ

A friend just shared an objection his atheist friend had to the Catholic Church. It went like this: “My atheist friend told me one of the things she disliked about the church was that they had all these great big fancy churches in poor countries but still asked for money from the poor and why they didn’t sell all the fancy stuff and help the needy.”

Here was my answer, maybe a bit more animated than necessary, but . . .

“Your friend has it back-asswards. I have been to the poorest areas of the Philippines and India and visited their beautiful churches. Who owns those churches? The Vatican? No! They are owned by the poor people who scratched every dime together to build a house for God worthy of him.

The Church, funded by these poor and wealthier donors, has also built the hospitals, schools, clinics and it feeds the poor. One quarter of the world’s population has no health care but that provided by the Church.

Why does your friend have a better house and nicer car than she probably needs? It is certainly much more opulence and expensive that people who live in poor countries. Why not quit being a hypocrite and sell her possession and distribute them to the poor? Let her put her money where her mouth is? Let her learn the real truth before she criticizes and condemns? 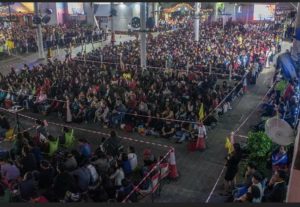 In the Philippines on the island of Cebu (as everywhere else) they have Mass every hour on the hour 12-14 hours a day in churches that are only separated by a few miles. The Masses are every hour on the hour starting at 5 AM and there is standing room only at every Mass. I’ve seen the same in India, and many other countries.

Who would DARE to take confiscate those churches and sell them? These churches are the center of the community, educators of the people give me five minutes and where they are always baptized at first I’m buried at that. The poor people would rally around their churches and kill anyone who would dare touch them. 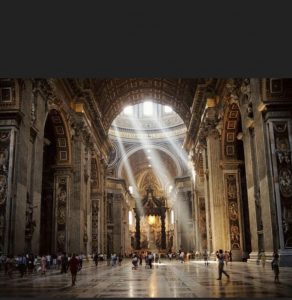 One day while praying in St. Peter’s Basilica in Rome I thought, “What does God think about all this magnificence, beauty and expense? Is He shaking his head in disapproval?”Then an example came to me.

Imagine my son Dominic works hard all summer to earn money and spends his summer building something magnificent to give to me—his grandfather whom he loves. Now imagine the day arrives and he presents me with an extravagant gift that represents his heart and soul and labor.

What would happen if I responded by saying, “Dominic, this is a big waste of your time and money! You should sell it and give it to the poor.”

“Should the Vatican Sell its Treasure to Feed the Poor“

Geez, I used to say that myself in my former life as a Protestant – when I was an anti-Catholic. Actually, if you added up all wealth and property of the Protestant churches and organizations it would FAR exceed that of the Vatican or all the individual dioceses around the world! Since it is often Protestants who make this challenge, do they ever suggest Protestants should sell all their land, buildings, pastors’ fancy cars and the mega-church $ millions?

Most people don’t realize that most of the Catholic Church’s “wealth” is in property, hospitals, schools, social services and churches. We are the largest health care provider in the world. To learn more about this, watch the fantastic video put out by www.CatholicsComeHome.com here. Click on “Epic Commercial.” This video make me PROUD to be a Catholic!

But, should the Catholic Church sell everything to feed the poor? No, first it shouldn’t and second it can’t. To find out why, read this article from Zenit (provided below). It was written several years ago but it is the same cogent argument and needs to be repeated often….