PrevPreviousLovely and Best Ad of the Year in my Estimation!
NextDid the Wise Men Meet the Shepherds?Next 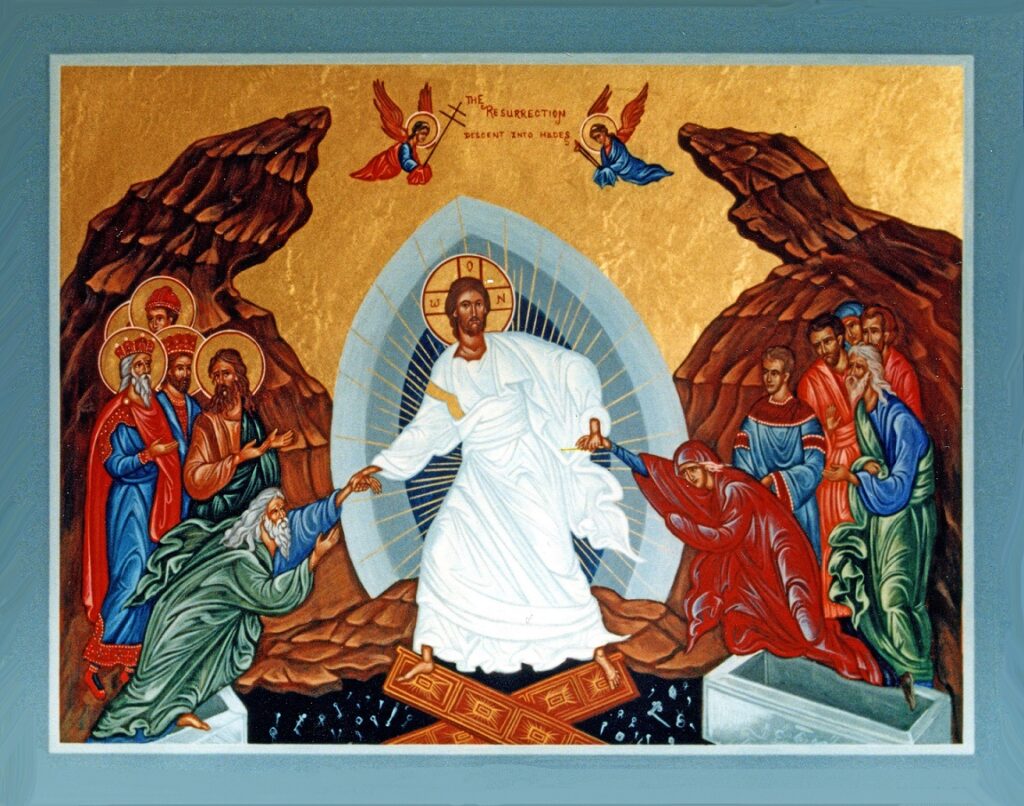 Today is the Feast Day of St. Adam and St. Eve.  What? those original sinners are saints? Yes, and so are many of the figures of the Old Testament.

In the picture above you see the resurrection of Adam and Eve. The Last Adam pulls the 1st Adam from the grave. Notice that Eve, embarrassed by her hand that took the fruit to eat, has her hand covered.

Adam and Eve have liturgical feast days. So do Moses, Elijah, Elisha, Elijah, Jeremiah, King David and many others. 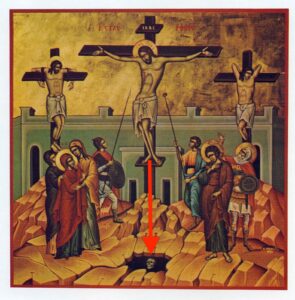 It is perfect to remember today the sin of Adam and Eve that brought evil and corruption, suffering and death into God’s perfect creation. It sets the stage for the marvelous redemption God planned — to bring a New Adam into the world to redeem and raise us up into the very life of the Trinity. “O happy fault of Adam that brought us such a great redeemer” we sing at Easter.

(Picture to left: Notice the blood of Christ drips on the skull of the 1st Adam below bringing redemption to his sinful ancestor.)

Remembering Adam and Eve today sets the stage for the birth of Christ, the 2nd or Last Adam and the new humanity is will bring. Praise God!

The Roman Martyrology (1600) lists saints recognized up to that point including many saints not in the Church’s general calendar. Some that it remembers are Habakkuk (Jan. 15); Isaiah (July 6); Daniel and Elias/Elijah (July 20 and 21); the seven Maccabees and their mother (Aug. 17); Abraham (Oct. 9); and King David (Dec. 29).

We in the West have not discussed it much, but the Eastern Churches remember them every year and their churches are full of their images.

The Catechism of the Catholic Church states,

“The patriarchs, prophets, and certain other Old Testament figures have been and always will be honored as saints in all the Church’s liturgical traditions” (CCC 61).

It not only explains the “sainthood” of Old Testament heroes, but gives a list of the dates for various prophets, kings, and virtuous men and women before Christ. For this article and calendar, click here.

In answer to the question on air about the redemption of Adam and Eve, I promised a bit of information. The Catechism 489 states, “Throughout the Old Covenant the mission of many holy women prepared for that of Mary. At the very beginning there was Eve; despite her disobedience, she receives the promise of a posterity that will be victorious over the evil one, as well as the promise that she will be the mother of all the living.“

“Today a great silence reigns on earth, a great silence and a great stillness. A great silence because the King is asleep. The earth trembled and is still because God has fallen asleep in the flesh and he has raised up all who have slept ever since the world began.… He has gone to search for Adam, our first father, as for a lost sheep. Greatly desiring to visit those who live in darkness and in the shadow of death, he has gone to free from sorrow Adam in his bonds and Eve, captive with him—He who is both their God and the son of Eve.… “I am your God, who for your sake have become your son.… I order you, O sleeper, to awake. I did not create you to be a prisoner in hell. Rise from the dead, for I am the life of the dead.”

(Picture to right: Jesus raises Adam and Eve from their graves. Notice they are wearing halos. Notice a similar picture at the top of the post.)

One Journal I own states it well, though I don’t agree with the article overall:

“In this first dispensation, there is a clear illustration that the only way of salvation is by the grace and personal provision of God. After the judgment section of Chapter 3, the literal translation states that the Lord God himself “made garments of skin for Adam and for his wife, and He caused to clothe them.”

The Lord God initiated and was the causative agent (Hiphil stem—“cause to”) of the personal redemption of Adam and Eve by providing a method of restoring the personal relationship with Him. Some conclude that the personal faith of Adam was expressed by naming his wife, Eve (living or life-giver), and believing that (strong textual emphasis) “she, she will be (the) mother of all living.”

This act would have verified that he believed in the future promise of God (3:15) and in the prospect of continued life after judgment (3:20). In a similar way, having acknowledged that the Lord was the source of her first born son, Eve confirmed her personal faith in the Lord and His previous promises of children (3:15–16; 4:1).

“Considering that this was a possible theophany of God, the full impact of the statement may be realized. This would be Christ himself who had performed this sovereign act of divine grace for Adam and Eve, another Old Testament verification that Christ was involved providentially in the affairs of mankind from the beginning!”   Conservative Theological Journal Volume 2 2, no. 7 (1998): 455–456.