Did the Wise Men Meet the Shepherds?

PrevPreviousHappy Feast Day of Sts. Adam & Eve (Dec 24) – Did you know some Old Testament people are Saints?
NextWhile in Ephesus I Gave My Short Talk on Mary the Mother of God and the End of Mary’s LifeNext

With Epiphany upon us, I thought I would post my article this Christmas season with bits of interesting information and details about Christmas. Join us any of five times in the Holy Land in 2022. Visit www.SteveGoes.com.

Did the Wise Men Meet the Shepherds? 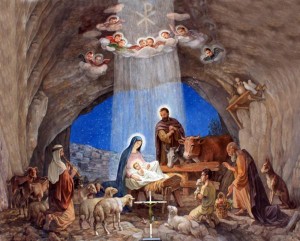 A king was born. He was born unlike most kings. There was no pomp and circumstance; there were no midwives or court attendants. There was only the bleating of sheep and the buzzing of flies. Giving birth in a cave-turned-stable was not like giving birth in a royal palace.

When a king is born proclamations ring out across the land. But no one knew about this exceptional birth. So angels felt the need to sing out. They burst from the heavens in glorious harmony declaring the royal birth to a group of shepherds sleeping on the ground protecting their sheep. The darkness of night was rent with brilliant light encompassing the terrified shepherds. The lead angel announced “Be not afraid; for behold, I bring you good news of a great joy which will come to all the people; for to you is born this day in the city of David a Savior, who is Christ the Lord.”

The king’s arrival had been foretold from of old. He was the long awaited savior of the world. But why were shepherds the first to discover his birth? Possibly because this king was also the anticipated Lamb of God who would take away the sins of the world. So, let me ask: who are the first to learn of a lamb’s birth in the middle of the night? Shepherds of course! 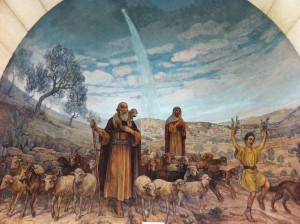 But the story recounted by Luke the physician is not the only account of the miraculous birth. Another account was written by an ex-tax collector named Matthew who informs us that the Jewish shepherds were not the only ones to discover this royal birth. Gentile magi—astronomers from the East—were also informed, but not by angelic choirs. They anticipated this historical event through astronomical observations and consultation with the Jewish scriptures.

It was an unusual star that led them to the infant Jewish king. They traveled at great risk for many for months, arriving from lands historically hostile to Israel. How amazing! The magi brought gifts and fell on their faces before a helpless child in an enemy land. It is often assumed there were only three magi because three gifts were presented (frankincense, gold and myrrh), but the number of distant travelers or the size of their entourage is unknown.

King Herod was in Jerusalem enjoying his palatial pleasures when the wise men arrived looking for the new king. Herod was worried. No one could help the magi. The star led them the last four miles to Bethlehem where they found the Child and fell prostrate. They presented gifts appropriate to royalty. 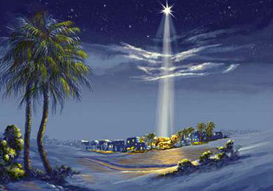 Luke and Matthew were not alone in writing accounts of the Christ. An old man named John, chosen by Jesus while still a young fisherman, wrote a personal account of his three years with the king. And Mark, who was Peter’s “secretary” recorded Peter’s recollections of his years with Jesus. Four witnesses wrote four accounts called the Gospels. They recount the one historical event from four different perspectives, just as in a courtroom four witnesses might testify about one case with four differing yet truthful accounts. Each Gospel writer had his own material, audience, emphasis and style.

For example, each author deals with the genealogy and birth of Jesus in very different and fascinating ways. Each account is true, non-contradictory, and essential to understand the whole story. Matthew was a Jew writing to Jews. He adeptly demonstrated that Jesus was the Jewish Messiah and King with royal pedigree through the lineage of King David to Abraham the patriarch of Israel and the father of the Jewish nation.

Mark, on the other hand, penned Peter’s gospel from Rome and presents Jesus to the Romans as a servant with no genealogy. A key verse in Mark summarizes the whole Gospel, “For the Son of man also came not to be served but to serve, and to give his life as a ransom for many” (Mk 10:45). A servant’s genealogy is irrelevant. Mark’s gospel begins with Jesus working. King and servant: no polar opposites could be more extreme. 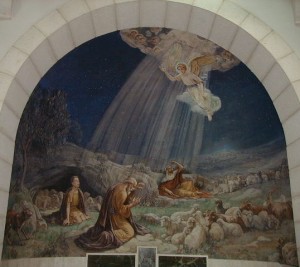 Luke, probably a Greek and the only non-Jewish author in the Bible, writes in part to fellow gentiles portraying Jesus as the ideal of humanity with a genealogy going back to the first man Adam. Jesus Christ is revealed as the perfect Man to a Hellenistic audience steeped in Greek philosophy and struggling for human perfection and meaning in the aftermath of their failed “glory days”.

Lastly, John reveals a very different beginning or “genealogy.” He fleshes out the full mystery of the eternal king starting with the words, “In the beginning was the Word, and the Word was with God, and the Word was God. . . . And the Word became flesh and dwelt among us” (Jn 1:1, 14). Jesus has no beginning—he is the beginning. John doesn’t write to an exclusive ethnic group; rather, he writes for the whole world and proclaims that Jesus is divine—by his very nature, God. And as God he is eternal and therefore has no genealogy. No science fiction has ever reached such heights. Truth is stranger than fiction?God has become Man. As St. Augustine said, “[Jesus was] the Revealer of His Father, Creator of His mother; Son of God from His Father without a mother, the Son of Man through his mother without a father.”

So the four gospels present Jesus Christ as both king and servant, as both God and man. Matthew and Luke tell the story of his birth, Mark and John do not. The four gospels differ in other aspects as well. But such differing stories with such carefully selected details do not imply contradiction. Rather, it gives them diversity, beauty, and depth. Like a diamond, the many facets must be viewed and appreciated to glimpse the elegance of the whole. 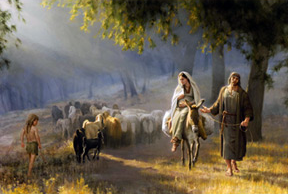 It seems that Matthew may be telling the nativity story from Joseph’s perspective whereas Luke tells Mary’s story. Matthew alone records the angel’s appearance to Joseph four times, whereas in Luke only Mary is visited by an angel. In Matthew Mary’s virginity and honor are defended, something done by a loyal and loving husband. Though no words of Joseph are recorded in Matthew it does tell us his thoughts and his quick submission and obedience to the will of God. Mary’s submission and obedience to God is not mentioned in Matthew, but is clearly recorded in Luke where it is her words and thoughts that are expressed.

One could easily conclude that Luke spent a considerable time with Mary, interviewing her about the miraculous birth and surrounding events. He relays many details that Mary had “treasured and pondered in her heart”, things only Mary would have known. It is Luke who records the words of the angel, Mary’s response, and the glorious Magnificat. He even begins the story with an account of Elizabeth, Mary’s relative. And whereas the genealogy provided by Matthew relates to Joseph’s ancestry, some have considered the genealogy recorded in Luke to be Mary’s family tree.

But despite the variety of information provided, these texts inspired by the Holy Spirit of God himself clearly proclaim the birth of Christ as a miraculous watershed event in human history. He is the Son of Man and Son of God miraculously born of a virgin by the power of the Holy Spirit in a cave-stable in Bethlehem and cared for by his legal, adoptive father Joseph.

Since “the East” probably meant modern day Iraq or Iran, the journey up the fertile crescent and down through modern day Syria and Israel would have taken a long time. They must have calculated the time of birth pretty accurately, arriving shortly after the birth but before the Holy Family fled to Egypt. So, the time frame certainly allowed for them to meet the shepherds. If I had been one of the wise men, I hope I’d have been wise enough to cross one more field to find the shepherds and get the full story—which is exactly what the Gospels have provided for us.

The truth of the Gospel account is not compromised because the Evangelists report the Lord’s words and deeds in different order. Nor is it hurt because they report His words, not literally but in a variety of ways, while retaining the same meaning. As St. Augustine says: “It is quite probable that each Evangelist felt duty-bound to narrate his particular account in the order which God suggested to his memory. At least this would seem to hold true for those items in which order of treatment would not affect the authority or truth of the Gospel. After all, the Holy Spirit distributes His gifts to each as He chooses (The Historicity of the Gospels [Sancta Mater Ecclesia], April 21, 1964, Instruction of the Pontifical Biblical Commission)

Come with us to see all this for yourself in the Holy Land. We still have seats open in 2023. One is already sold out.