In discussion with a friend, I wrote the following and thought I would share it. Of course, the greatest danger is our own selves as we abandon the Judeo-Christian worldview and increasingly adopt a Marxist, Materialist, Humanist perspective.

But, these musings are related to outside dangers which become relevant mainly because of our shift away from the Christian worldview that made the West great.

“Everywhere we travel in the world it is acknowledged that “as America goes, so goes the world.” Most countries and people who love freedom and democracy say that if America falls the whole world will fall.

Who will it fall to? I used to think it was the Muslims who are our biggest threat. They used to conquer with the sword but now they conquer with immigration and the population bomb. 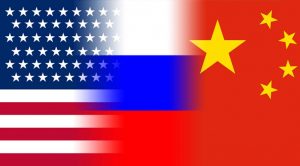 Now my thinking has shifted. I think that China is more likely our greatest enemy, more than Islam. And they will be much more ruthless than the Nazis and the Soviets.

Like Protestantism, Islam is very divided and therefore can never unite to become conquerors of the world — there are too many factions within Islam that oppose and fight against each other. “United we stand, divided we fall.”

This is also what happened in Europe. When we were following “the footprints” of Martin Luther through East Germany in 2017 with a group (mostly converts) commemorating the 95 Theses and the 500th anniversary of the Reformation (“Deformation”), our guide said that Germany is atheist and lost its faith because of years of Soviet Communism.

I told her and my group that she was incorrect. The whole problem in Germany was started by Martin Luther when he divided Christianity. “United we stand and divided we fall.” Had Germany stayed united and strong in the Catholic faith there is nothing that the Communists could’ve done to crush their national pride, unity and Christian faith.

Poland is a good example of a country that stayed faithful to the one holy Catholic and apostolic Church. And they still stand strong today having survived Nazism and Soviet Russia. Germany collapsed.

If Christianity was united institutionally and morally and philosophically — Islam and China would have no chance against us.

However, we in the West have given up the worldview that made us such a powerhouse of good with enterprise and ingenuity that has never been rivaled. We are now very near collapse from within.

China is quite different than Islam. They have a powerful unified communist government. They are ruthless and have goals to conquer the world.

I told my kids that we have two enemies — one to the east and one to the west. The Chinese and the Muslims are rising up against the West on both sides. And right when we in the West should be strong and resilient, we are collapsing morally, economically, militarily and philosophically.

President Trump was only a short parenthesis to the decline. Biden is now speeding up the fall of the West. The two powers of Islam and China are powerful and our great-grandchildren will live under the rule of one or the other.

Unless of course, the Lord causes a huge revival or the 2nd Coming of Christ happens. Maranatha! Come, Lord Jesus!