My eldest daughter invited me to my grandson’s ‘dedication’ at her new place of worship.  Worship? Sorry. Her new place of…..well, the giant Olympic-sized structure that, after being directed in by police/traffic officers, upon entering, reminded me of a mall.  Oh and by the way, I didn’t witness any worship. My 1st thoughts were…”Wow! A frappucino Mass! Where do I get my 3D glasses?” 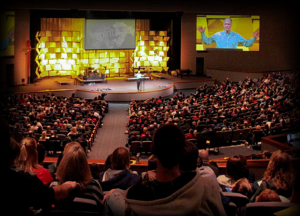 Joined daughter, son in law and grandson in the biggest theater I’ve ever been in.  The music was ghastly and horribly loud. I found out later, I could have gotten ear plugs from one of the kajillion ushers. Seriously? I personally choose 11:00 Mass at St. Johns because of the music. So now this place is on strike # 6 or 7.  I’m still giving it a chance as I love my child and grandchild more than life.

Music’s done. Smoke machine turned off.  Some hip, young guy puts down his guitar and welcomes us to the (lack of) worship service.  A special welcome to us uninformed-not-belonging-to-the-mega-church-there-because-of-the-dedication, schmucks.

He also welcomed the 4 or so other locations as they are all gathered at their ‘malls’ watching on the big screen. Are you kidding me?!?! He then tells us that this dedication “is not a baptism as they don’t baptize infants. “The Bible is clear that we are saved by God’s grace, not by dedication, baptism, or our own works.”  And that “every baptism recorded in the Bible occurred when someone was old enough to make a faith decision.”

I got up and walked out. Mostly because my husband wouldn’t let me stand up and yell “LIAR!” “Go home. Open your bible, read it and get back to us.” As today is Sunday and I went to Mass at my church with my live priest and beautiful music and the presence of our Lord and true praise and worship and forgiveness…..I’ll admit to you that I wanted to say worse. In my mind I did. 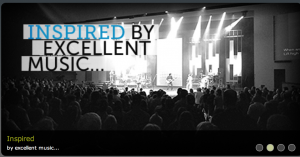 This daughter was a Catholic.  This daughter knows better.  I felt as though this daughter ripped my heart out and stomped on it.  She claims she ‘switched’ because her husband, while attending Mass with her, was offended and did not feel comfortable because she told him he could not receive communion as he didn’t understand the true meaning. They went church-hopping and ended up at Eagle Brook. Super mega franchise church. Did I say church? My apologies. 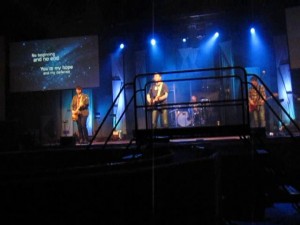 Please help me.  I’ve heard you speak at Little Canda, MN.  Which of your books would help me and God help her, my daughter. [Steve here: Crossing the Tiber would be the book. It is my conversion story and has effected thousands to come back to the Church – blessed be God] I say books as she is an avid reader.  Books are best in this case.

I feel just sick that my grandson is this little nobody in this horrible excuse for a place of worship…or lack thereof.  I so want him to be a part of our beautiful, Catholic family.

I must say, since I’ve been so very negative, that a good thing did come from this visit……daughters 2 and 3 (who happen to be teenagers, mind you) both stated from the back seat on the way home, “I can’t wait to go to real church tomorrow.” That was huge for daughter #2…..teenage angst and all that. I appreciate any help you can give me.

Check out this video from a person who posted it as “This is my church.” This was shared and viewed at all of their campuses (a word they use for all of their satellite “churches”, rather, theaters.

STEVE RAY HERE: The current trend of mega-churches is pretty much an American phenomenon. It is a response to Americans’ desire for entertainment, theatrics, “big exciting stuff” and religion-lite. They don’t want a lot of commitment, history, or quiet. Mega churches replicate the media world. In the first century they would have been similar to the colosseum, the entertainment genre of the day.

I am not saying there is not good being done in the mega churches, there is. But the Church that Jesus Christ founded 2,000 years ago is not about entertainment but about sacrifice, the Eucharist and the liturgy given by the Apostles which has been practiced since the first century. This good mom has described it all very well.

Around 150 AD Justin Martyr described the apostolic Church of the second century following the pattern laid down by the apostles. There was only one church, the Catholic Church. Read this and tell me where you find it today 🙂

And on the day called Sunday, all who live in cities or in the country gather together to one place, and the memoirs of the apostles or the writings of the prophets are read, as long as time permits; then, when the reader has ceased, the president verbally instructs, and exhorts to the imitation of these good things.

Then we all rise together and pray, and, as we before said, when our prayer is ended, bread and wine and water are brought, and the president in like manner offers prayers and thanksgivings, according to his ability, and the people assent, saying Amen; and there is a distribution to each, and a participation of that over which thanks have been given, and to those who are absent a portion is sent by the deacons.

See that ye all follow the bishop, even as Jesus Christ does the Father, and the presbytery as ye would the apostles; and reverence the deacons, as being the institution of God. Let no man do anything connected with the Church without the bishop. Let that be deemed a proper Eucharist, which is [administered] either by the bishop, or by one to whom he has entrusted it.

Wherever the bishop shall appear, there let the multitude [of the people] also be; even as, wherever Jesus Christ is, there is the Catholic Church. It is not lawful without the bishop either to baptize or to celebrate a love-feast; but whatsoever he shall approve of, that is also pleasing to God, so that everything that is done may be secure and valid.

But consider those who are of a different opinion with respect to the grace of Christ which has come unto us, how opposed they are to the will of God. … They abstain from the Eucharist and from prayer, because they confess not the Eucharist to be the flesh of our Saviour Jesus Christ, which suffered for our sins, and which the Father, of His goodness, raised up again. Those, therefore, who speak against this gift of God, incur death in the midst of their disputes.

So dear mega church friends, where is your bishop? Where is your Eucharist? The heretics of the first century denied the Real Presence of Christ in the Blessed Eucharist. Where is the liturgy of the apostles on your stages? Even imagining Peter or Paul officiating at a Rock Concert church service is unthinkable.

Thank God for the one, holy, Catholic and apostolic Church!