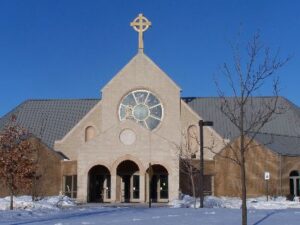 … though obviously it wasn’t a Mass since there was no consecration. The reserved Eucharist was distributed and now Our Lord is absent from the tabernacles of the world until the Resurrection. I feel like I am on Mount Zion, at the prison where Jesus was kept over Holy Thursday night. He has been “taken from us only to appear again after the Resurrection. I just love being a Catholic! 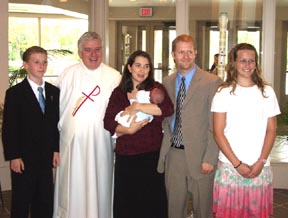 (Picture: Deacon Dan Foley baptizes my grandson last year)
Over 1200 people gathered in Christ the King Parish in Ann Arbor Michigan. Seven of our parishes’ twenty-three seminarians were in attendance as well as three of our six deacons. Our venerable Deacon Dan Foley gave an elegant and insightful homily on the Cross, the death of Christ and the ever present reality of the sacrifice in our lives. How I wish that every Catholic parish had a deacon like Deacon Dan. Fr. Ed Fride was his old self — how I wish every parish had a priest like Fr. Ed! The service was over two hours long but seemed like an hour.
Interestingly, more than 1/2 of the people were under 25 years of age. This is not scientific, but a general observation. The devout attitude and depth of reverence were palpable. I had tears in my eyes more than once. I enjoyed the ancient songs, sung by the angelic volunteer choir. Many were sung in Latin which swelled to the rafters with testimony to the unity of the one, holy, catholic and apostolic Church. In our pews were rich and poor, old and young, black, white, Hispanic, Asian — from Africa, Europe, South America, the Middle East and Asia. It was not like my old Baptist “church” — this was a testimony to the Universal (Catholic) Church! 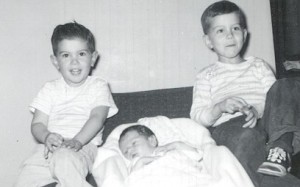 (Picture: Me on the right with my brothers when we learned all the old Baptist favorites by heart)
I especially loved the old  favorite hymns, some I remember by heart from my years as a Baptist. Yes, hymns that are shared by Catholic and Protestant alike. I love it when these old favorites are sung because I have them memorized and I can sing them by heart with my eyes closed — with my mind focused on the words and on the Word, the one who agonized on the Cross for my sins. 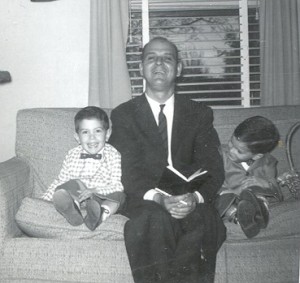 (Picture: My brother Dave, my dad and me about 1960. Every night as he put us to bed my dad always sang “The Old Rugged Cross” —  “On a hill far away, stood an old rugged cross, the emblem of suffering and shame …” )
Today at church we sang one of my old favorites: “O Sacred Head surrounded by crown of piercing thorn; O Bleeding Head, so wounded, reviled and put to scorn!” which — though we sang it as Baptists — it is attributed to the Doctor of the Catholic Church, St. Bernard of Clairvaux (1091-1153; long before Baptists even existed). 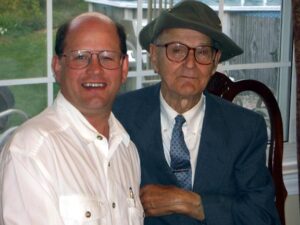 (Picture: Me and Dad on his 80th birthday.)
Then today we sang another of my old favorites from childhood “When I Survey the Wondrous Cross, on which the Prince of Glory died, my richest gain I count but loss, and pour contempt on all my pride” It was written by Protestant Isaac Watts, of whom the Columbia Encyclopedia says, “His several hundred hymns embody a stern Calvinism assuaged with a gentleness and sympathy.” These hymns sung today at our Good Friday service filled my heart with memories and love for my Lord, respect for my Baptist past — and most of all, a love for Our Lord Jesus and the fullness of the faith in His Catholic Church. 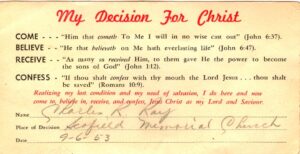 (Picture: Card my dad signed when he accepted Christ in the Baptist tradition kind of way.)
Tomorrow we celebrate not only the Easter Vigil — but also my father’s 90th birthday. He is the best dad that ever lived.
I have been asked to offer the prayer before dinner on Saturday as we celebrate my father’s 90th birthday, even though everyone knows I will tear up and take forever. It will be prefaced by a short speech in which I will praise of my father who has always been, and still is, like a sweet aroma that permeates every room he enters. In his presence people feel the love of God, a sense of acceptance, and a humble, joyful soul ready to meet God. I have nothing but fond memories. 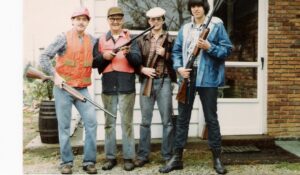 (Picture: Hunting with his boys. I am second in from the right.)
Even though he is now bent over, tired, wearing hearing aids and slower with his walker than when he used to go hunting and hiking with his boys — he has not lost his kindly smile, his quick humor and the respect of everyone that has ever known him. 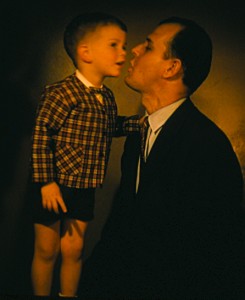 (Picture: Me and dad back in the 1950’s dressed in our Baptist church clothes. We never missed Sunday School, Sunday preaching, Sunday night, Wednesday night prayer meeting, or the deacon’s meeting. Dad took me and I knelt and prayed with all the Baptist deacons every week.)
Dad’s 90th birthday party Saturday will be a joyous occasion with a movie full of old pictures and video clips (put together by my wonderful son Jesse). There will be a lot of remembering and tears and old stories and  rejoicing.  We expect almost 100 people to come to the dinner.
I will put up some pictures after Easter.
In September we will celebrate my mom and dad’s 70th Wedding Anniversary!
Share on facebook
Share
Share on twitter
Tweet
Share on email
Email
Share on print
Print