"Jesus Is Not A Homophobe" – T-shirt allowed in School

PrevPreviousLand of the Free, Because of the Brave!
NextA Young Doctor Writes to President ObamaNext 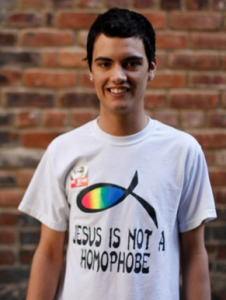 His school told him, “No, you cannot wear that T-shirt.” He sued. The court granted this kid $20,000 as a settlement and allowed him to wear his stupid T-shirt to school.

But the kid’s stupid T-shirt implies that Jesus condoned or even approved of homosexuality. In this the kid is very wrong. Jesus loved people but he despised sin and sinful conduct – and would not back away from any argument or statement regarding sin. He knew how to differentiate between sin and the sinner. Even at the disapproving gasp of the religious minded Jews, Jesus spent a lot of time with sinners but not to condone their activities, but rather to seek and save those who were lost (Luke 19:7-10).

Scripture is as clear about the sin of homosexuality from cover to cover. For one example Romans 1:25-27 says, “Because they exchanged the truth about God for a lie and worshiped and served the creature rather than the Creator, who is blessed for ever! Amen. For this reason God gave them up to dishonorable passions. Their women exchanged natural relations for unnatural, and the men likewise gave up natural relations with women and were consumed with passion for one another, men committing shameless acts with men and receiving in their own persons the due penalty for their error.“

What people do on their own time in their own private lives is not my business. But when such conduct is flaunted and accepted as normal, then it is my business and should be the business of a moral society. Not only do homosexual men and women flaunt their newly “acceptable” lifestyle today, but the courts are defending it and making it a crime to say anything to the contrary. They are also demanding special rights.

Our country is going off the deep end. Acceptance of the homosexual lifestyle has always been a sign of a culture’s decline. Hang on America. Watch out Christians. We will not be looked on favorably. Anything we say will be considered “Hate Speech” and we’ll be persecuted, prosecuted and ostracized due to our moral stands.

For the whole article on this stupid T-shirt and the misguided manipulated young man wearing it, click here.