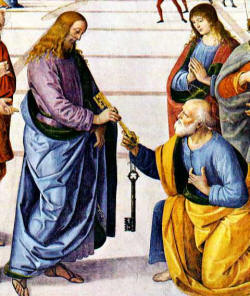 Someone on the Catholic Discussion Forum asserted his opinion and tradition against the papacy in the Catholic Church. I gave short, imperfect, and brief comments in the ten minutes I had free today. This is a thread on whether or not the office of the papacy with qualifications for successors is mentioned in scripture. My comments are in dark blue.

1. In order for the papacy or an earthly head of the church with successors to be true as a definer and protector of truth, it would logically have to be described from the beginning of the church in the apostolic period and not as a later development.

Why does this have to be true? Wouldn’t this claim then be imposed on all development of doctrine such as the canon of Scripture. In other words, for the truth of sola scriptura to be true, it would logically have to have been in existence from the first, which of course not the case. Further, in my book Upon this Rock I demonstrate quite conclusively that the concept of the Primacy of Peter in Rome was quite well understood and practiced in the early Church. By clicking on the link to my book one can also access hundreds of pages of discussion and documentation. For the very few documents that survived the first centuries, we have a very strong case for the primacy of Rome.

2. For the office of papacy to be true, it would need to be described with qualifications for successors, in the inspired writings among the gifts given by Christ for church unity when he ascended into heaven in Ephesians 4:7-16, yet the papacy is conspicuously absent.

How does he know it was NOT described with qualifications. We know that the Alexandrian Library in Egypt was massively stocked with books and documents that no longer exist. We unhappily lost much of what was written and practiced in the early Church. But, even saying that, does this fellow have any documentation from the early Church to affirm a 27 writing canon from the earliest years, or the word “Trinity”? He is very free with “it would logically have to be true” when he points at us but not so freely with his own position.

3. Such a fundamentally important central role as the papacy, in order to be true, would be a central repeated theme of writings by the first Christians: Luke, James, John, Paul, and Peter himself, yet there is not a single mention.

And where do we find these same men repeating the express doctrine of a New Testament canon or the clearly expressed theologies of the two natures of Christ or the three Persons in the hypostatic union of the Trinity? In fact, there are many things that are taken for granted today that were not expressly stated in the NT. Protestants live with this every day with their traditions. Reading the writers of the NT within the context makes it pretty clear about the papacy if someone takes the blinders off. By the way, none of these writers mention the Rapture, Sola Scriptura, the Trinity, faith alone, or any host of other Protestant traditions.

4. Although “head of the church” is a phrase, office, and title in scripture, only Christ and never Peter was ever referred to as such.

This would of course be true in that the NT is more expressly interested in establishing who Jesus was in the documents of Scripture. One does not have to find something expressly stated in order to find it believed and universally practiced. I would suggest Dave Armstrong’s book about proofs of the Papacy from the Bible. Jesus is the head of the Mystical Church and baptized believers are the members. But the Church is not just an amorphous invisible blob or some sort of non-descript brotherhood. It is a real organization of real people in the Body of Christ. The Church has an address! We are to have a visible unity as Jesus intended, not an invisible imaginary “unity.” Jesus left a shepherd, a head of the visible church as the source of unity and teaching. This can be substantiated in the NT unless one refuses to remove the blinders. Even Protestants have their pastors who function effectively as the “head of their church” though they would quickly claim that it is actually Jesus, but in reality, in the day-to-day the pastor effectively functions as the head or CEO.

James quotes Peter and the OT as the infallible source of theology on the matter. It doesn’t to say Peter was the head expressly as it was quite clear to those who attended and by the theological determination who was the head. James was the bishop of Jerusalem sitting in the chair that was vacated by Peter to become the teacher of the world as St. John Chrysostom says. Our friend makes too much of “explictely” and this can certainly and effectively be turned on him much more so than on us. His tradition falls far short if he wants to apply the same standard to himself. Too often Protestants judge Catholic practice by Protestant ideals. What happens if we judge Protestant practice by Catholic ideals?

6. Peter is never identified in scripture as the singular bishop of the Jerusalem diocese or of any diocese.

Peter alone was given the keys in Matthew 16 and singularly headed the Church in the book of Acts. It seems that there was a college of bishops that worked together with one at the lead. This is very likely regarding Peter. In Scripture no one is expressly stated as bishop of Jerusalem and yet anyone who knows history knows that this is what existed and from the earliest times.

7. If there was an infallible head of the church and voice of Christ on earth with successors after Peter, there are no claims, writings, or pronouncements from them until Victor blunders onto the scene with his error, even though the period was fraught with heresies, and the entire NT was written when the apostles and church were persecuted from the beginning.

Maybe our opponent has never heard of St. Clement? This guy really needs to read my book Upon this Rock which documents the primacy of Rome from the apostolic age.

If the church was intended to be built on none other than the pope or person of Peter, why is he not mentioned at all by one of the most important first Christians in the following passage speaking of who the church is built upon?  Ephesians 2:19-22 “Consequently, you are no longer foreigners and aliens, but fellow citizens with God’s people and members of God’s household, built on the foundation of the apostles and prophets, with Christ Jesus himself as the chief cornerstone. In him the whole building is joined together and rises to become a holy temple in the Lord. And in him you too are being built together to become a dwelling in which God lives by his Spirit.”

The Achilles Heal of the Papacy Theory (yeah, right 🙂
If indeed Peter was the head of the church with successors as the voice of Christ and the basis of unity, where is this voice during the turbulent years of persecution and heresy before Constantine? Someone will say, “They went to their deaths as martyrs.” But so did the apostles, yet we have their writings well-preserved for us. Where are the writings of the popes from 60 AD to 325 AD? (Clement’s letter is not from him as a singular bishop but from the church of Rome to the church of Corinth, not to the singular bishop of Corinth.) We have something recorded ABOUT some of the other alleged popes but not a single written word FROM them. But correct me if I am mistaken. I would find their writings most interesting.

First, 1 Clement WAS writtten by St. Clement as both Catholic and Protestants agree, and also mentioned as such by those who refer to the letter in the first centuries. Like I said, I gave pages and pages of documentation from the early Church. Just because one doesn’t read history or do their research does not mean it does not exist. I would also suggest that this friend read the Treatise on the Development of Doctrine by Cardinal Newman. The papacy can be demonstrated from the first centuries, but we also accept the concept of the development of doctrine (as must the Protestant, especially with the canon and their sola scriptura) which puts everything in its proper place. I am proud to be a Catholic rooted in Scripture and the early Church!