How Do We Know What Pilate Said?

PrevPreviousFinally Heading Back to the Holy Land!
NextYes, we do know where Jesus was buried and rose again!Next

I was just listening to the Bishop Strickland Hour and he was speaking of Pilate and his dialogue with Christ. This question came to me: How do we know what was said in that dialogue?
Could it be possible that Pilate himself later disclosed to others what happened and what was said between him and Jesus?  Or were other people there who later recorded it?
I’d like to think that maybe Pilate converted, but maybe there is no historical evidence of that.
Anyway, hope you have a great Easter!  Thanks for all you do.
Rob
*********************************************
Rob:

It’s a good question and one that arises often in the gospels. How did the gospel writers know certain information? 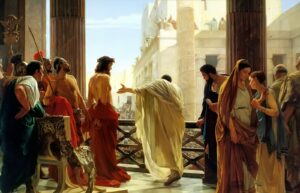 First, we must realize the Holy Spirit is involved and made sure what was written was true and inspired. He is the primary author. It is not unlikely that the Holy Spirit brought back to their memory everything they had heard and seen (John 14:26).

CCC 105  God is the author of Sacred Scripture. “The divinely revealed realities, which are contained and presented in the text of Sacred Scripture, have been written down under the inspiration of the Holy Spirit. … the Old and the New Testaments, whole and entire, with all their parts, on the grounds that, written under the inspiration of the Holy Spirit, they have God as their author and have been handed on as such to the Church herself.”

Second, there are legends of Pilate and/or his wife converting and then possibly sharing his story, but there’s not a lot of credibility to that. See below a quote from two Bible Dictionaries. However, that does not preclude those early historians had access to court documents or eyewitness accounts or transcripts.

Third, we can assume that the Gospel writers oftentimes provide the “gist” of what Jesus or others said. Just as in an account of an event today one may paraphrase certain aspects of a conversation, it would seem the same would happen with ancient writers as well, especially since were without recording equipment and did much from memory. 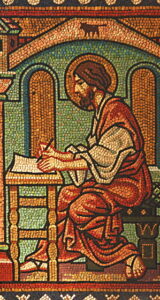 Fourth, there were many witnesses to what happened that day with Pilate. The gospels were written later and even Luke says he took time to collect all the traditional stories to compile his account. There is no reason to believe that it would be difficult to retrieve a very accurate account of the proceedings.

Luke 1:1-4   “Inasmuch as many have undertaken to compile a narrative of the things that have been accomplished among us, just as those who from the beginning were eyewitnesses and ministers of the word have delivered them to us, it seemed good to me also, having followed all things closely for some time past, to write an orderly account for you, most excellent Theophilus, that you may have certainty concerning the things you have been taught.”

Fifth, many people forget that Jesus was alive with his disciples for 40 days between his resurrection and his ascension into heaven. We know from Luke 24 that he walked with two disciples on the Road to Emmaus explaining in the Old Testament how everything related to him. It is not unlikely, and even probable, that Jesus relayed the stories himself to his apostles.

Catholic Bible Dictionary  “Pilate is the subject of many legends and apocryphal writings, including the Acts of Pilate and the Death of Pilate, which recount, unreliably, his attempted suicide and later conversion. Up to the 1960s the Orthodox Church of Abyssinia celebrated a feast in Pilate’s honor on June 25, and another for his wife on October 27.” .

The International Standard Bible Encyclopedia   “The NT writers’ lack of hostility toward Pilate is reflected in the later Apologists. Tertullian called him “a Christian by conscience” (Apol 21.24) and attributed to him a letter commending the faith. Origen described Pilate’s wife as a convert, and the Coptic church ultimately canonized Pilate himself. Eusebius, who cited in part Josephus’s account of Pilate, attributed the governor’s suicide to divine justice but did not comment directly on his responsibility for the crucifixion. Later tradition produced the fictitious Acts of Pilate (see Apocryphal Gospels III.B) and colorful accounts of his death.