Did Jesus Ever Run? 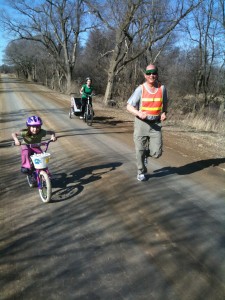 I posted this awhile ago, but thought it fun to post again. Though my running days are over (Doctors have told me I ran to much and my knees are shot), I still do a lot of fast walking and even have a bike in Jerusalem. But it is good to remember the days I felt like an antelope.

I’ve run a lot around Israel in the last year — along the shore of Galilee, from Nazareth to Sepphoris and back (click hyperlink to see on YouTube video), around the walls of the Old City and then back through the Stations of the Cross, from Jerusalem to Bethany and much more — I love it! But while huffing a puffing along I’ve often wondered if Jesus ever ran. I concluded YES and NO.

Primarily I run to to do the right thing and to stay healthy, and secondarily because I love it — especially the ability to see things up close and to experience places and things and people like you can never do from a car or a bus. At right I am running with my son Jesse’s family and you can see Maria Faustina racing along beside me. I like to do this too!

I don’t think Jesus or others of his time (except children playing and athletes training for the Olympics) ran for reasons of health nor to see places from the ground. They saw everything that way already since they walked everywhere out of necessity.

My suspicion is that people did not run when they could walk and didn’t walk when they could sit down. They tried to conserve their energy. Life was tougher in those days as it was. Nothing was automated. Even getting water was not simply turning a water faucet but walking a mile with a heavy jug on your shoulder. People did not exert energy for the fun or it or to stay healthy or to see the countryside. They walked or ran only when they had to.

Walking and running tend to be unusual in our day to. It take too much energy and we tend to take the path of least resistance. We drive here and there. We take escalators or elevators to avoid the stairs. We park our car as close to the front door of church as we can to avoid walking an extra fifty steps.

I’ll never forget the scene in The Gods Must Be Crazy when the lady in curlers jumped in her car, backed it out the 30 foot driveway, got her mail and drove back up the driveway.

I did a word search in the Bible to see how many times the word RUN or RAN were used in the Gospels. It happens that in the RSV-Catholic Edition the words are used 17 times. All of them are about others running, not Jesus. Mary Magdalen ran to tell the disciples that she had seen the risen Christ; Peter and John ran to the tomb (see picture above to left). The father of the prodigal son ran to greet his wayward son returning home. Some ran to Jesus and some ran to tell others about Jesus. 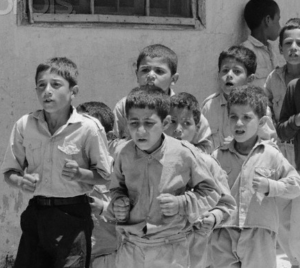 I think Jesus ran as a boy. All boys run. In our house we have a rule — “No running!” Yeah, right. Tell 12 grandkids not to run in the house! They are full of life — how can they walk? Jesus ran as a boy and had fun playing kick ball or chase through the dusty paths between caves in Nazareth. Mary watched him run and laugh and tumble many times. I have no doubt of this.

But did he run as an adult? When he and his father walked back and for to work every day from Nazareth to Sepphoris — did they walk or run? I ran back and forth but I don’t’ think they did. They were up before the sun and had an hour to walk to work where they probably labored in the heat for 10 hours or more before walking back uphill to Nazareth. I think they conserved their energy and walked, taking the easiest paths.

But there may have been times when he ran too. We are told very little about his actual life and day to day activities. Even John tell us the purpose of his gospel was to convince us to believe in Jesus as our savior, not to tell us what he ate or if he ran to work. He wrote, “And there are also many other things which Jesus did, which if they were written in detail, I suppose that even the world itself would not contain the books that would be written” (Jn 21:25). 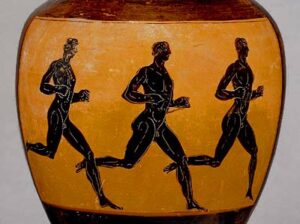 St. Paul mentions running quite a bit. He uses it as a metaphor for living the Christian life. We must run the race, he says. He refers to Olympic runners who run for a leafy laurel which will wither and fall off in a few days. How much more should we run the race to win the crown of eternal life (1 Cor. 9:24; Heb. 12:1). Olympic runners ran stark naked so as not to be tripped up or slowed down by his robes. Paul tells us to cast aside any encumbrance — like sin — that will keep us from winning the race. He is right!

Sometimes I wish the biblical authors had written more — for my curiosity’s sake. I wish Luke had told us more details of the discussion on the road to Emmaus or what Peter and Paul talked about for two weeks alone in Jerusalem. Maybe that is just my own problem since I’ve always had an insatiable curiosity.

When I get to heaven I am going to RUN up to Jesus and after I worship him and thank him for my salvation — I am going to ask him if he ever ran. And since I will want to explore heaven (and I will have new knees), I might as him if he would like to go out for a run and show me around. Well, maybe…