Dear Protestant: Where Did You Get Your Bible?

Dear Protestant: Where did you get your New Testament?

At least a couple of times every week, Protestants use New Testament verses to show me where the Catholic Church is wrong about something. I always make them take the necessary step back by asking the following:

“Where did you get your New Testament?”

When they answer that it came from God (as indeed it did), I say, “Yes, but what was the mechanism God used to bring it to you today? How did it come to you, historically and in real-time, since it did not drop out of Heaven into your hands, leather-bound?”

Nine times out of ten, they have no answer because they have never considered the question.

The Catholic Church officially determined and set the canon of the New Testament approximately 400 years after Christianity began. The canon was declared by the body of Catholic bishops at the Council of Carthage (397 A.D.) and confirmed by Pope Boniface (419 A.D.).

This is a historical fact.

Let me flesh out a few more of the details, which very few Christians (Protestant or Catholic) know.

After Christ’s ascension into Heaven, and after the Holy Spirit descended upon the first Christians at Pentecost, the Church thrived and grew exponentially for years before even one line of the New Testament was written. Let that sink in: Baptisms, catechesis, communal worship, conversions of thousands of sinners, Apostles and their companions traveling to other lands and risking imprisonment, torture, and death to evangelize the world with zeal — all went on for over a decade before the New Testament was even begun, much less completed.

Without having written a word, the Church was teaching, preaching, growing, and flourishing for many years.

Eventually, a very few Apostles and their disciples started writing down some of the Church’s oral Tradition: The Gospels, which recorded the life, death, and resurrection of Jesus, and also the Epistles (letters) of St. Paul and others, which gave encouragement and instruction to local churches being established throughout the world. The young Church cherished those gospels and letters and began to incorporate them into her liturgies and Masses. 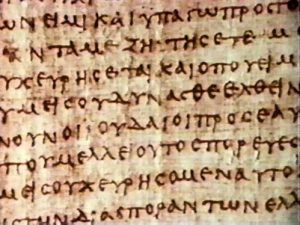 More and more written accounts and testimonies materialized as the Church grew, but contrary to today’s popular belief, it was not obvious to the early Christians which of these writings were truly God-inspired.

As brutal persecution of the Church continued in those first centuries, clarity about Christian writings became important. After all, Christians were being martyred routinely, and it was necessary to know which books were worth dying for.

Three categories of writings existed at that time:

The first group included divinely-inspired books that we have in our Bible today, such as the four Gospels, the Epistles of St. Paul, and the Acts of the Apostles.

The second group included books that were simultaneously accepted in some Christian regions, rejected in others, and disputed in others. Some of these were indeed divinely inspired, such as the Epistles of James and Jude, one of Peter’s, two of John’s, the Epistle to the Hebrews, and the Book of Revelation, even as many Christians did not believe they were. Some were books that never made it into the final canon of the New Testament, but which several Christian communities considered inspired (and even used for catechizing and in the liturgy), such as the Shepherd of Hermas, the Epistle of Barnabas, Apostolic Constitutions, the Epistle of St. Clement, St. Paul’s Epistle to the Laodiceans, etc.

The third group consisted of the fakes floating around, spurious works which were never acknowledged or claimed by the Church, such as about 50 false gospels including the Gospel of Thomas and the Gospel of James, a couple dozen “Acts” (Acts of Pilate, Acts of Paul and Thecla, etc.), and some epistles and apocalypses. 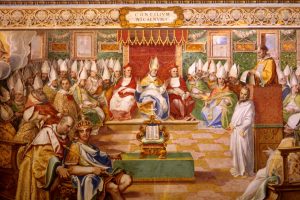 Under the promised guidance of the Holy Spirit and after a long series of historical events, a gathering of Catholic bishops went through the process of authoritatively and infallibly setting the books of the Christian canon, using the following criteria: a) The book in question must have been written in apostolic times by an Apostle or one close to an Apostle, and b) The book in question had to be doctrinally sound, completely conforming to Catholic Church teaching.

Several books met those criteria, and so it happened that some four centuries and 20 generations after Christ’s Resurrection, the Magisterium of the Catholic Church authoritatively set the canon of the New Testament, ending all confusion and doubt among the faithful.

Rome had spoken, and the canon was closed.

This leaves us with some takeaways:

— If the Catholic Church (bishops and pope) had the authority from God to set the New Testament canon, then she cannot be the corrupt and un-Christian “Whore of Babylon” as is claimed by many Protestants.

— If one accepts the canon of the New Testament, one must also accept the authority of the entity who gave it to us, i.e., the Catholic Church.

— The New Testament cannot be “personally interpreted” by each individual Christian because it was never meant to be taken outside of the Church from which it came.

— The New Testament was discerned and canonized by men who had divine authority to do so — men who believed explicitly in the Mass, the Eucharist, the ministerial priesthood, Confession, Purgatory, veneration of Mary, infant baptism and infused grace, justification by faith and works, the Communion of Saints, etc., etc.

— The Bible came from the Church. In other words, the Bible is Church-based, not the other way around. If you get this paradigm wrong, you get some messed-up theology.

— If you believe that your eternal salvation is based entirely on a Book, isn’t it important to know where the Book came from and who was given authority to proclaim it? Who meticulously copied, preserved, protected, and guarded it with their lives, and who ultimately vouched for the fact that it is indeed the written Word of God?

There is so much more to discuss, and I would love to do so in the comments. Meanwhile, one of the best books on the subject, which I devoured when I came back to the Church, is Where We Got the Bible: Our Debt to the Catholic Church, by Henry G. Graham.

**Note: I did not include the Old Testament canon in this post, because I wanted to work with something that both Protestants and Catholics agree on, namely, the 27 books of the New Testament.