PrevPreviousEucharistic Congress starts virtually today, Friday, June 3: My Topic: “Is the Mass Really a Sacrifice?”
NextSteve Ray at Israel Museum Shows How The Temple Demonstrates Our Salvation in ChristNext

Cardinal Reinhard Marx, the 67-year-old archbishop of Munich and Freising, has offered his resignation to Pope Francis. 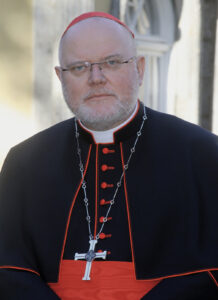 The influential cardinal is a member of the pope’s Council of Cardinals, the coordinator of the Vatican Council for the Economy, and until last year the chairman of the German bishops’ conference.

The archdiocese of Munich and Freising published the cardinal’s letter to the pope and personal declaration on June 4 in German, English, and Italian.

In his May 21 letter to the pope, Marx outlined his reasons for seeking to resign from office.

He wrote: “Without doubt, these are times of crisis for the Church in Germany. There are, of course, many reasons for this situation — also beyond Germany in the whole world — and I believe it is not necessary to state them in detail here.”

“However, this crisis has also been caused by our own failure, by our own guilt. This has become clearer and clearer to me looking at the Catholic Church as a whole, not only today but also in the past decades.”

“My impression is that we are at a ‘dead end’ which, and this is my paschal hope, also has the potential of becoming a ‘turning point.’”

He continued: “In essence, it is important to me to share the responsibility for the catastrophe of the sexual abuse by Church officials over the past decades.”