“Call No Man Your Father”

“Call No Man Your Father” 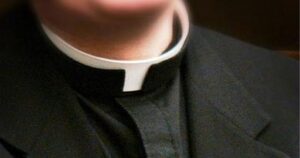 I received several questions recently and will post my answers separately over the next few days. Here is the first question which I received and answered.

1.) In Matthew 23:9 Jesus says: ” And call no man your father upon earth: for one is your Father which is in Heaven.”

I find this point quite confusing especially concerning the Catholic church where the priests are called “father”.

Also I’ve heard people address priest on Catholic radio call-in shows as “good father” and they accept this greeting without protest…..Jesus clearly stated that none is good but God the father. Surely man can only be “good” in a relative sense compared to other men but compared to God the Father, surely man is not good.

First, regarding the word good. I would agree with you that “good” is somewhat relative based on the context and meaning. They called Jesus good, and we all know he is good, yet Jesus said only the Father is good. Is Jesus denying here that he is good? Of course he could not mean that since it would be contrary to the truth. So we have to understand that there must be more to this than what we see on the surface.

Jesus is making a subtle argument with the Pharisees using rabbinic hyperbole and certainly not arguing that he is not good, nor that others can be good. I often say to my son, “You are a good boy!” or to my wife, “You are a good wife!” I do not think either of these comments would be offensive to God, any more than to say to a pastor “You are a good pastor.”

I too wondered many times in my past about calling a priest “father.” Upon further study and reflection I resolved the issue in my mind. There are several ways to approach the issue of calling a priest “father.” Let me begin this way. This passage does not forbid us from calling a man “father”; rather, it says “Call no man your father.” As I see it the command would not forbid me to call a priest father but forbids the calling of someone your father. A seemingly small detail, but actually rather important if we read Scripture carefully.

Now, if Jesus commands me to call no man my father then that would seem to include my earthly dad. Taking the words of Jesus literally here, would it not mean you cannot call your biological father father? Of course it would, even more so than calling a priest father since I am not actually calling the priest my father but a father. However, I do call my biological father my father.  The words related to my biological father would be more in violation of Jesus’ command than to call a priest father. So, I think we see the need to be careful with our interpretation here.

I used to refuse to call a priest or pastor father, yet I never hesitated to call my Sunday School teacher teacher. It seems that if we take Jesus extremely literally here we would stop calling any man or women teacher, father, or leader. I don’t think this is the actual point Jesus is trying to make, and if so, we are all being disobedient to his commands both Catholics and Protestants. But even Scripture freely uses these titles for offices and gifts within the Church (e.g., Eph 4:11)

It seems that Jesus is using what it referred to as rabbinic hyperbole, meaning speaking in exaggerated terms to make a point in the opposite direction. For example, Jesus says if your right hand or eye offend you, cut it off and pluck it out! (Mt 5:29-30). Most people recognize that Jesus was not commanding us to amputate or blind ourselves but is emphasizing the seriousness of sin and the eternal consequences of our actions. If we followed this “command” to the extreme limit we would all be eyeless and handless.

He is using hyperbole to demonstrate the foolishness of the Pharisees in their extreme positions in the other direction. It is the way rabbis argued in the first century which is important to understand so as to properly interpret Scripture within its proper context. Historical and cultural context is as important as the textual context.

Now, another point that should be made here. If Jesus is literally forbidding us from calling a man father then it seems that he and other Scriptural writers, under the inspiration of the Holy Spirit, violated this injunction themselves. In Matthew 1 alone the word father is used 39 times referring to men. Jesus himself calls Abraham father both as a physical and a spiritual father (Lk 16:24, 30; Jn 8:56). Stephen refers to Abaham as our father (Acts 7:2) and Paul speaks of “our father Isaac” (Romans 9:10). 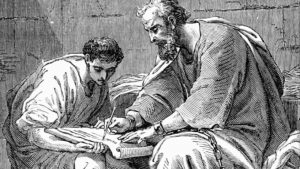 “This charge I commit to you, Timothy, my son, in accordance with the prophetic utterances which pointed to you, that inspired by them you may wage the good warfare” (1 Tim 1:18); “You then, my son, be strong in the grace that is in Christ Jesus” (2 Tim. 2:1); “But Timothy’s worth you know, how as a son with a father he has served with me in the gospel” (Phil. 2:22).

Paul also referred to other of his converts in this way, even referring to himself as a spiritual father: “To Titus, my true child in a common faith: grace and peace from God the Father and Christ Jesus our Savior” (Titus 1:4); “I appeal to you for my child, Onesimus, whose father I have become in my imprisonment” (Philem. 10). None of these men were Paul’s literal, biological sons. Rather, Paul is emphasizing his spiritual fatherhood with them.

Ultimately, God the Father IS the only father since he created us all, yet Paul says that he himself is a spiritual father with spiritual children. Here is what he writes to the Corinthians:

I do not write these things to shame you, but to admonish you as my beloved children. For if you were to have countless tutors (teachers) in Christ, yet you would not have many fathers, for in Christ Jesus I became your father through the gospel. Therefore I exhort you, be imitators of me. For this reason I have sent to you Timothy, who is my beloved and faithful child in the Lord, and he will remind you of my ways which are in Christ, just as I teach everywhere in every church (1 Cor 4:14-17).

Not only does Paul say there are spiritual fathers, but calls himself a spiritual father. Does not this violate the words of Jesus? Paul does not think so, nor does the Holy Spirit who inspired his very words. Beyond that, Paul even tells us to imitate him, to follow his example — which we can suppose would extend to calling our spiritual fathers father.

Understanding Jesus’ words in the full historical, cultural, and literary context, Catholics see no contradiction between the real meaning of Jesus’ words and the use of the word father in relation to our earthy fathers (dads) or those who act as our spiritual fathers and teachers.