A Friend Asked about Bible Translations and Differences in Wording

PrevPreviousCardinal Burke will join our sold-out pilgrimage to the Shrines of Wisconsin – here is his latest homily, EXCELLENT!
NextQuote of the Day: Rigidity in RomeNext

A friend wrote with a very astute question about differences between Bible translations. Here is his question.

Sorry to bother you with this, but I’ve been struggling for some time with the inconsistency of bible translations and wanted to run my concerns by you in case you have time to respond.  I know that we are called to believe that the Bible is the inerrant word of God, inspired and written under the guidance of the Holy Spirit.

However, since the scriptures were not written in today’s languages where the meaning is subject to interpretation of the translators based on their understanding of the original language, I can’t help but question whether they are also under the guidance of the Holy Spirit.

Having done many translations throughout my career, I am keenly aware that translations are greatly subject to the interpretation of the translators, based in part by their life experiences and culture, and so realize that Bible translators have different understandings of the original languages regardless of how well versed they may be in the original Greek or Hebrew.

The reason I bring this up is that this has become very evident to Lina and I as we read the daily scriptures together as part of our prayer time.  I like to read them in English from Magnificat and she reads them in Spanish from The Word Among Us, and I can’t begin to count the times when we need to stop in the middle of the readings and discuss how the two seem to have different meanings, shaped not only by semantics but more so by the culture and upbringing that we have had.

We also have a Bible with four different English translations of both testaments, where we have also discovered how one translation of a given passage can be interpreted very differently from the other.

I am not sure how to deal with these discrepancies in the choice of words in the different bible translations that we have access to, and I can only imagine that it is the same thing with translations to any other language around the world today. How are we to react when different words have different meanings for different people?  Without being Bible experts and not even dreaming that we can begin to understand Greek and Hebrew, how can we determine what the original writers meant under the guidance of the Holy Spirit and which is correct?

And here was my response:

Your question is very astute and wise. Most people never think of those things and it shows that you are intelligent and considering things deeply. 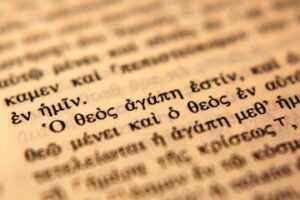 There is no other literature in the world that is more highly attested to or has more manuscripts and documents than the New Testament. So what we have is very very accurate to the originals that were written–which are called the “autographs”.

Having said that, the language was Greek and has to be translated into English and Spanish and other languages. All this you already know 🙂

The science of translation is fraught with danger and can be affected by biases and culture and in a very few places uncertainty about what the original text really was due to variations in some of the manuscripts.

The older translations like the King James Version (1611) are less accurate and precise because they did not have some of the most important and recently discovered Greek texts at the time. The later translations that we have are much more accurate, pinpointing evermore carefully what the original actually was. 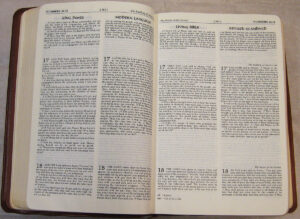 What I like to do is read the Bible with various translations side-by-side, like you mentioned you were doing. This is actually the best solution. I have a Catholic Bible study program called Verbum (and if you’re interested in it let me know and I’ll give you more information).

I have well over 30 translations of the Bible on that program along with interlinear Greek and Hebrew with a lot of lectionaries and commentaries to help guide me when I really want to do some detailed work. But that’s not available to the average reader of the Bible without purchasing the sources, books or Verbum.

We did an experiment one time. We had 50 people in our Bible study and we send five of them off to another room secluded. We wrote a poem which we put up on the board. The remaining 45 people had to write that poem down on a piece of paper with a mandatory two mistakes or more. No copy was perfect. We sent those 45 flawed copies to the translating committee in the other room and told them to try and re-create the original poem from all of the copies with mistakes.

When they came back out they had the poem translated 100% accurately because they worked like the textual scientist doing recreating what was originally written by the apostles.

The way it worked was, 44 people would spell God “God”, but one may have spelled God as “Gad”. They threw out the variant. They worked through the flawed copies and in this way they were able to reconstruct the original poem exactly. This is a good example of bringing the New Testament documents from the first century until today. I use the story to explain why our translations are 99.9% accurate to the original writings of the apostles in the first century. And even the few minor variants do not effect important theological matters. 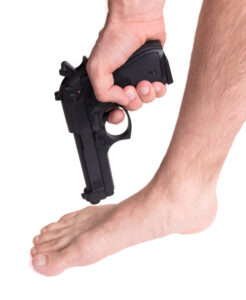 There’s also the issue of whether to translate the original Greek literally or dynamically. In other words, should we translate the Greek exactly as written by the Apostles, or should we try to emphasize what we think they meant to say. An example would be if I spoke with a Russian who had poor English and I said “I shot myself in the foot”. The Russian would immediately look down at my foot to see if I had a bandage or a cast on my foot. He does not realize that “shot myself in the foot” is a figure of speech meaning I did something stupid or made a fool of myself.

So when translating the original Greek for the Russian should I say literally “I shot myself in the foot” or should I rather say in Russian what the Greek meant to say “I made a fool of myself”? This is always the issue when translating. It is why some of your translations have different words or ways of saying things because some translations are dynamic and others are literal.

Here’s are two articles I wrote on my website about Bibles translations. Also, if you want to check out the best Catholic Bible Study software on the planet, visit www.Verbum.com/steveray8. If you use promo code STEVERAY8 to receive a 10% discount.  Hopefully this little discourse will help. Let me know.