What is the Opposite of the word “Believe” in the Bible?

PrevPreviousVideos of 100’s of Protestants, Many Pastors, who have converted
NextDiscussion with Mike Romano at Archangel Radio about Projects including Elijah and ElishaNext 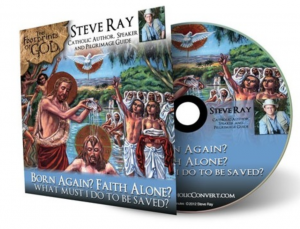 I received an email today regarding one of my talks I gave at Franciscan University of Steubenville. It is on my audio CD “Born Again? Faith Alone?” In the talk I said that the opposite of “believe” is to “disobey.” In other words, Jesus does not just require that we “believe” in him like we believe 2 + 2 = 4. When Jesus says “believe” he means complete obedience, a total surrender of our lives to him.

Here is the email I received:

Yesterday, I watched the speech that you gave at Franciscan University of Steubenville on “Faith Alone”, and I think your reference to the definition/opposite of belief in John 3:36 is a nail in the coffin to “Sola Fide”.  My question is this: what if someone’s Bible doesn’t list the opposite of belief as “do not obey”, but rather “reject” or “not believe” (such as the KJV, NIV, Darby, etc.)?  How do you argue for the version of the Bible that spells out “do not obey”, such as the RSVCE, that it’s the correct translation of Sacred Scripture?

Thanks Bill (made up name for anonymity)

John 3:36 (RSVCE)  “He who believes in the Son has eternal life; he who does not obey the Son shall not see life, but the wrath of God rests upon him.”

Here is my response:

Every translation of the Bible has some bias. It is very difficult to translate the Bible into another language because of the difference in languages and words and nuances. Here are two articles I wrote on that https://www.catholicconvert.com/documents/Translations.pdf
and https://www.catholicconvert.com/documents/NIVbias.doc.
What really matters are two things: 1) what the word means in the original Greek and 2) how the first readers understood the word.
Here are a few Greek dictionary entries for this word apeithe? from two of the most scholarly and reputable reference works on the Greek of the New Testament.
36.23 apeithe? unwillingness or refusal to comply with the demands of some authority—‘to disobey, disobedience.’ ‘whoever disobeys the Son will never have life’ (literally ‘… will never see life’) Jn 3:36. ‘God’s wrath comes upon those who do not obey him’ Eph 5:6.
(Johannes P. Louw and Eugene Albert Nida, Greek-English Lexicon of the New Testament: Based on Semantic Domains (New York: United Bible Societies, 1996), 467–468.)

Disobeys occurs only here in John’s Gospel; it is obviously the opposite of believes, and so JB and Phps translate “refuses to believe.” It is possible to argue that the meaning of disobeys throws some light on the meaning of believes, that is, this kind of belief is the belief which leads to obedience. Therefore one may translate “Whoever obeys the Son has eternal life, and whoever disobeys the Son will never have life.” However, it is better to retain the terms “believes” and “disobeys,” since the very lack of clear opposition tends to reinforce the meaning of the respective terms.

How it is translated in a variety of translations: