They Fell for the Lie; it was sad – I’ll Pray for Them

PrevPreviousWith Great Friends at Fullness of Truth Gala in Houston
NextHey Steve: Jesus Taught us to Pray to the Father Alone, not Dead SaintsNext 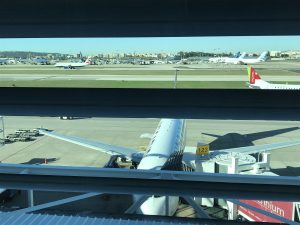 I posted this at the time, but thought to share it again because it is even more appropriate now and even mentions Halloween.

We were in the airport in Lisbon Portugal heading to Israel to pick up our next group. Janet and I were standing in line and a man started up a conversation with us.

He and his wife were in their late 60s and I could tell they were good Americans. They’d be ideal neighbors, keeping their lawn mowed and their property maintained. But they fell for the lie and it has infected their whole life which became apparent in our short conversation. 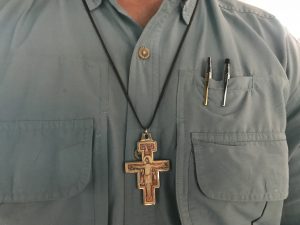 I always wear my San Damiano crucifix from Assisi Italy.  It is great for evangelism because it often starts conversations (like it did today). It’s the one that spoke to St. Francis. The gentleman commented on my crucifix and said he had never seen one like it before and it was beautiful. I said, “Thank you! I wear it proudly as a Catholic and I want people to know what I believe.“

His face saddened as he replied, “I envy your faith.” His wife immediately chimed in with a disparaging tone, “Well I’m happy it works for you.”

I said, “We discovered the Catholic Faith when we were 39 years old and it’s the best kept secret in the world.” She made sure I knew she didn’t believe any of it.

Because we are Christian and Catholic we believe in families. We told them that we have four children who are married and we are now free to travel and take groups to Catholic lands. 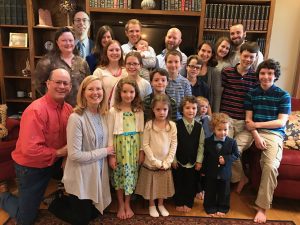 We explained we had 15 grandchildren (two still in the womb). She was shocked, he looked sadly envious. He made it quite clear he wished he had the same but that they never would. They obviously had a different emphasis in their life and it wasn’t for families.  Their children learn something very different than ours did.

He seemed to have a tender heart and be sad about  his life but she was outspoken and belligerent.  She proudly stated, “We don’t have any grandchildren and we never will. We have grand-dogs!” 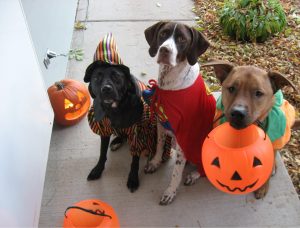 He asked if we got to see our grandchildren often and we said yes, that we are a very close family. He looked sad again as she stated, “Since we don’t have grandkids and never will, we love our grand-dogs. We even had them all dressed up for Halloween in doggie costumes.”

He told they do have two children who they rarely see but neither are married and will never have kids. The man said he cries every day missing his family.

I told them that Catholics have always respected the environment. It has always been an essential part of our teaching that God created the heavens and the earth and created man in his image and made man stewart and caretaker of the environment.

I explained that we are given the earth to use but not abuse. Like a caretaker who works for a rich family has responsibility to tend the gardens so we do the same for God’s earth. I said this is always been part of our teaching. 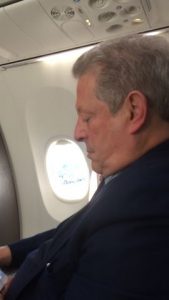 I also told her I don’t buy all the environmental mumbo-jumbo that’s being presented by the liberals today. I said it’s just a scheme for the government to get more control over our lives – it was all hyped up. She said, “I sure feel sorry for you.” I said, “Ma’am I don’t buy any of it. I’ve read too much and know there’s a lot of fake news and fake science out there today.”  She parroted a few of Al Gore’s favorite lines.

He seemed very interested in my opinion and was ready to ask me questions when we had to go our separate ways. I shook hands with a man and thanked him for the nice conversation and said I hope they have a nice flight.

I’ll be praying for these folks that they come to the same conclusion about God and the Catholic Church and  also discover the best kept secret in the world. I will pray especially for him because I think he had an open heart and was pretty much bullied by his wife.

I will continue to proudly wear this cross.

(Some of our grandkids dressed for Halloween! No dogs among them 🙂 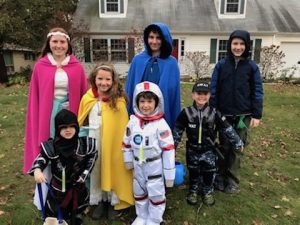