Patty Bonds, her Parents, and her brother James White

PrevPreviousPraise for Republicans in Congress
NextPope's Trip to the Holy LandNext 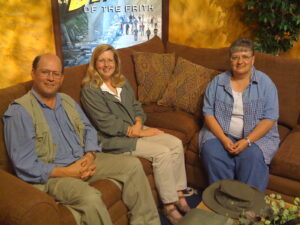 Patty Bonds, a very dear friend of mine whom my wife and I have visited many times in Phoenix — and interviewed by Janet and I for our upcoming Defenders of the Faith TV series. For more info and pictures on the venture, click here for an earlier blog.
On her blog Abbas Little Girl she has been documenting her nightmare childhood with a sexually abusive father. She tells the story of her father’s sexual abuse, her mother’s blind eye and silence and her brother’s denial and subsequent rejection. Some of you may have heard of her brother, James White, the anti-Catholic Reformed Baptist.
I thinnk she has been very courageous in disclosing her painful story, her subsequent conversion to the Catholic Church and the healing she’s received by the grace of God. Her new ability to forgive seems nothing short of miraculous. You can read her detailed journey Out of the Darkness on her blog.
This week she posted her latest installment of “Out of the Darkness.” It is prefaced as the “Hardest Piece I’ve Ever Written” posted appropriately, or inappropriately enough on February 14th, St Valentine’s Day. Many people who have similar family issues will understand how difficult it must be for a woman to confront and expose such a childhood trauma that covered many years — as she explains the painful story of her dysfunctional family and the unfortunate repercussions she’s received especially after telling the story of her abuse. I relay on her disclosure on her blog to make others aware of her story and aware of her offer to help others in similar situations.
If you know of friends or family that have been abused — especially by a family member — you may want to point them to Patty’s blog to find help and to learn from another who has suffered incest and abuse. I commend Patty for her courage and outspoken willingness to share her story and to help others who have suffered in a similar manner. Write her a note of encouragemement if have the time.
Share on facebook
Share
Share on twitter
Tweet
Share on email
Email
Share on print
Print