First, I sadly begin by saying that I have always had great respect for Patrick Coffin and consider him a friend and ally in the culture wars. When he was the host of Catholic Answers Live we probably did 100 shows together. We have traveled together. I consider him a dear friend. 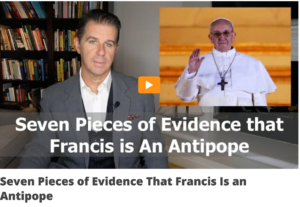 However, I do feel compelled to comment on some of his recent public comments regarding Pope Francis — claiming that Pope Francis is an anti-pope and a dress rehearsal for the antichrist. You can watch his video and read his notes here. I consider these comments very ill-advised, incorrect and detrimental.

His argument is extremely weak and unconvincing, in fact, I am surprised that Patrick would consider himself correct in his assertion based on the weak arguments he makes. He is too smart to fall for this in my estimation. I have sympathy with a person who has problems with this pope, but to claim he is not pope is a whole different matter.

By no means am I personally happy with this pope, and I continue being frustrated with his papacy, but I will never cross the line to reject his papacy or to question that he is the duly elected pope or to suggest that Pope Benedict XVI never really resigned and is still the pope today.

If you want to know my thoughts on Pope Francis and how we should view his papacy and how we should respond, you can listen to my talk “How Does a John Paul II Catholic Survive in a Pope Francis World”  which I gave in the presence of about 10 bishops at a gathering of the Equestrian Order of the Holy Sepulchre.

To date, there have been two respectful refutations of Patrick Coffin’s assertions. I consider both of these rebuttals to be accurate, respectful, charitable, concise and theologically correct.

I had thought to put a response together myself, but don’t feel I could do any better than these two rebuttals. Both are about an hour-long, but quick-paced and easy to follow.

Again, I love Patrick and am grieved that he has felt it necessary to take such a leap off the cliff and hope that he recants sooner than later. My prayers and friendship are with him.

1)   Michael Lofton on his Reason and Theology website and podcast HERE.