I arrived on the scene with my gun and stoically loaded in some self-defense rounds (although I was clearly not in danger). I did not lavish the idea of slaughtering a lamb, but my friend and new-farmer, Pat, called and sheepishly asked for some help. I guess he thought I was qualified since I had butchered last year’s deer with the help of my family.

It took a while for me to prepare the surroundings, I had never killed something so large, at such close range. During these few minutes I had time think about the gravity of what was about to happen.

Of course my mind took me back to the Jews and passover. Remember, the Bible is not just filled with stories, but with accounts of historical events. These events that we are familiar with actually happened. The Word of God prescribed, no dictated, the killing of a lamb. For the Jews, the lamb was not just dinner. The blood of the lamb was spread on the horizontal and vertical wood of the door frames (of course we recognize this as a foreshadowing of Christ’s blood dripping from His wooden cross). 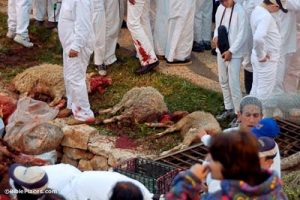 We all know that the consequence of sin is death, yet today we do not always see or feel that direct connection. Before Jesus, the Lamb of God, came as our final sacrifice, a cute, woolly lamb <baaa>, had to die in expiation for sins. The Jews symbolically placed their own sins on the head of the lamb before it was killed in Leviticus 1. The male sheep was chosen from the flock for its spotlessness, just as Christ, sinless and perfect, died for our sins.

We Catholics are blessed with the sacrament of confession, a very quick and clean way of cleansing sins from our soul. Well, let me tell you there was nothing quick or clean about killing a lamb. If we had to go through this every time we sinned I would expect people would either sin less, or would carry more sins around on their hearts. 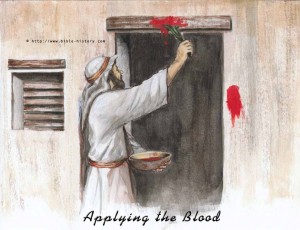 I tell the following story, not for the sake of gore, but because it was a very raw and spiritual experience. You should stop here if the thought of blood makes you queasy.

I was compelled to pause, and say a prayer thanking God for this animal and for the gift of it’s life. At first it all happened quite fast: The the gun popped, a red spot appeared on the lambs head, the lamb dropped. I was glad that was over with.

What happened next surprised me. All living things try to avoid death, and even after the lethal blow, the lamb was not going to die without a fight. I apologize, for the detail, but far more blood than I expected began pouring out of the sheep’s mouth and nose. The famous painting “Adoration of the Lamb” by van Eyck flashed in my brain, (of course in the painting the sheep is standing, but the flow of blood is clearly key in the comparison).

My friend Pat, the instigator of this whole event, took action (and large knife) holding the sheep down with the full weight of his body and slit the throat. As more blood emerged it was clear that the bloody descriptions in the old testament will never be void of imagery for me anymore.

PETA people refuse to eat lamb chops or wear sheepskin because of (I assume) the violence of slaughter. (or maybe they just need some cause to distract them from the evils of abortion and euthanasia that many support). Before any scriptural lessons, I think seeing that this tasty protein-source doesn’t start out in a Styrofoam package at Meijers is good to know.

But seriously, what kind of a “merciful” God would order His people to do something so violent and base? The answer points to the Eucharist, and is so deep that we need to understand God’s plan of salvation is exposed in history and recorded in scripture. Now we just need to know where to look. 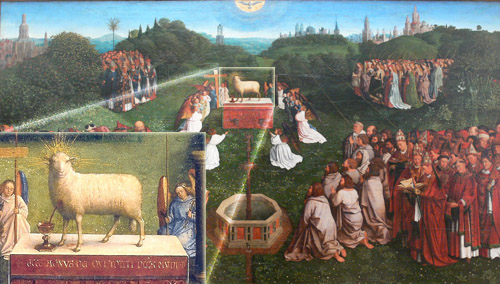 My dad, Steve Ray, teaches about the Real Presence of Christ in the Eucharist, and its Biblical foundations; he can speak for hours about the beauty and reality in his talk entitled Defending the Eucharist: You are What You Eat. The whole talk can be found here, and is really a great listen.

I pray that you will all draw closer to our Lord and find joy in His Cross and Resurrection.