Pagan Idols into the Tiber River: It Wasn’t a Stunt

Whatever that was, it wasn’t a ‘stunt’ 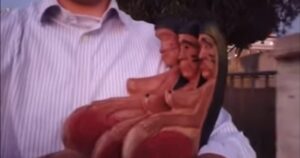 A few days ago men removed some female figurines (centerpieces for several weird ceremonies in Rome the last few weeks) from a church and tossed them into the Tiber River. Vatican spokesman Paolo Ruffini dismissed the act as a “stunt”. Regardless of how one assess this act, however, I think it not accurate to describe it as a mere “stunt”.

Removing these figures from a church and tossing them into the Tiber does not simply call attention to the problem of setting up such objects in a church it also removes the statues from the church and thus solves the problem of having them set up in a sacred place. Such an act, good act or bad, is more than a “stunt”, it is form of direct action against a problem.

The Vatican having ruled out the possibility that the nude statues might represent the Virgin Mary or ‘Our Lady of the Amazon’, it is disputed whether the figurines portray the Amazon pagan goddess Pachamama or (at least per a handful of Vaticanisti) merely some vague “life force”. It is not for me to opine on who or what the objects actually represent and if someone wants to argue that chanting to and bowing before figurines of naked women does not count as worshiping strange gods, well, who am I to say?

But a fuller assessment of the act of these two men does not rest solely on whether the figures are demonic or merely faddish. Canon 1210, addressing the dignity of Catholic holy places in general, states: “Only those things which serve the exercise or promotion of worship, piety, or religion are permitted in a sacred place; anything not consonant with the holiness of the place is forbidden…” And Canon 1220 § 1, addressing churches specifically, states: “All those responsible are to take care that in churches such cleanliness and beauty are preserved as befit a house of God and that whatever is inappropriate to the holiness of the place is excluded.”

Theses canons, in my view, do not simply preclude the placement of obviously demonic or pagan artifacts in our churches, but rather, require those in charge of sacred places to set up objects that are positively conducive to Christian prayer and worship. If, as the Congregation for Divine worship stated in 1987(*), the mere fact that that some music is admittedly beautiful does not justify its performance in churches, then all the more so should church authorities be on guard against setting up objects widely and reasonably seen as representing pagan deities in Catholic sacred spaces. I suggest (and more to the point, the Code of Canon Law understands in, say, Canon 214), that the faithful have the right to trust that what they see in Catholic sacred places is actually there in service to the sacred and is not simply a gesture toward some form of political correctness or the latest cause du jour, to say nothing of it possibly being simply evil. Ignoring concerns about the proper use of sacred space with a shrug and a ‘we don’t really know what it is’ is to ignore the positive duties that Church leadership owes to the faithful.

As a man of law I am also a man of order and, as a rule, I hold that removing objects from private property is not an act of good order. But then, neither is setting up idols (whether to demons or to secular causes) in Catholic churches an act of good order. Over time the disregard of law by those in charge eventually brings about disregard of law by those subject to it. And that in turn can result in acts that are much more than mere “stunts”.