Feast Day of Joachim & Anna: Nativity and Presentation of the Blessed Virgin Mary

July 27 is the Feast Day of Mary’s parents Sts. Joachim and Anna. Their story is not told in the Bible, but in a 2nd-century document entitled The Protoevangelium of James. In this document we read of the birth and presentation of Mary and her childhood through her marriage to Joseph and the birth of Jesus. This document was known and loved by the first Christians. It is the source for the names of Mary’s parents Joachim and Anna. It is fascinating.

I have only provided the first 1/3 of the document. The second part is about Joseph and Mary’s betrothal. The third about the birth of Jesus.

The Protoevangelium of James
The Birth of Mary the Holy Mother of God,
and Very Glorious Mother of Jesus Christ

IN THE RECORDS OF THE TWELVE TRIBES OF ISRAEL was Joachim, a man rich exceedingly; and he brought his offerings double, saying: There shall be of my superabundance to all the people, and there shall be the offering for my forgiveness to the Lord for a propitiation for me. For the great day of the Lord was at hand, and the sons of Israel were bringing their offerings. And there stood over against him Rubim, saying: It is not meet for thee first to bring thine offerings, because thou hast not made seed in Israel. And Joachim was exceedingly grieved, and went away to the registers of the twelve tribes of the people, saying: I shall see the registers of the twelve tribes of Israel, as to whether I alone have not made seed in Israel. And he searched, and found that all the righteous had raised up seed in Israel. And he called to mind the patriach Abraham, that in the last day God gave him a son Isaac. And Joachim was exceedingly grieved, and did not come into the presence of his wife; but he retired to the desert, and there pitched his tent, and fasted forty days and forty nights, saying in himself: I will not go down either for food or for drink until the Lord my God shall look upon me, and prayer shall be my food and drink. 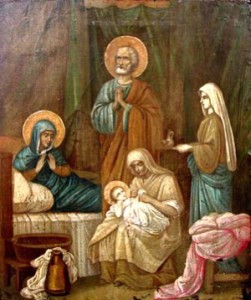 2. And his wife Anna mourned in two mournings, and lamented in two lamentations, saying: I shall bewail my widowhood; I shall bewail my childlessness. And the great day of the Lord was at hand; and Judith her maid-servant said: How long dost thou humiliate thy soul? Behold, the great day of the Lord is at hand, and it is unlawful for thee to mourn. But take this head-band, which the woman that made it gave to me; for it is not proper that I should wear it, because I am a maid-servant, and it has a royal appearance. And Anna said: Depart from me; for I have not done such things, and the Lord has brought me very low. I fear that some wicked person has given it to thee, and thou hast come to make me a sharer in thy sin. And Judith said: Why should I curse thee, seeing that the Lord hath shut thy womb, so as not to give thee fruit in Israel? And Anna was grieved exceedingly, and put off her garments of mourning, and cleaned her head, and put on her wedding garments, and about the ninth hour went down to the garden to walk. And she saw a laurel, and sat under it, and prayed to the Lord, saying: O God of our fathers, bless me and hear my prayer, as Thou didst bless the womb of Sarah, and didst give her a son Isaac. 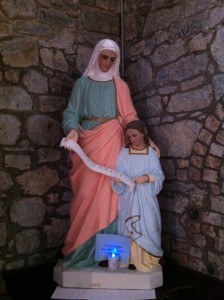 4. And, behold, an angel of the Lord stood by, saying: Anna, Anna, the Lord hath heard thy prayer, and thou shalt conceive, and shall bring forth; and thy seed shall be spoken of in all the world. And Anna said: As the Lord my God liveth, if I beget either male or female, I will bring it as a gift to the Lord my God; and it shall minister to Him in holy things all the days of its life. And, behold, two angels came, saying to her: Behold, Joachim thy husband is coming with his flocks. For an angel of the Lord went down to him, saying: Joachim, Joachim, the Lord God hath heard thy prayer Go down hence; for, behold, thy wife Anna shall conceive. And Joachim went down and called his shepherds, saying: Bring me hither ten she-lambs without spot or blemish, and they shall be for the Lord my God; and bring me twelve tender calves, and they shall be for the priests and the elders; and a hundred goats for all the people. And, behold, Joachim came with his flocks; and Anna stood by the gate, and saw Joachim coming, and she ran anti hung upon his neck, saying: Now I know that the Lord God hath blessed me exceedingly; for, behold the widow no longer a widow, and I the childless shall conceive. And Joachim rested the first day in his house. 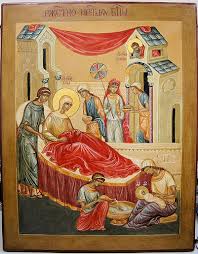 5. And on the following day he brought his offerings, saying in himself: If the Lord God has been rendered gracious to me, the plate on the priest’s forehead will make it manifest to me. And Joachim brought his offerings, and observed attentively the priest’s plate when he went up to the altar of the Lord, and he saw no sin in himself. And Joachim said: Now I know that the Lord has been gracious unto me, and has remitted all my sins. And he went down from the temple of the Lord justified, and departed to his own house. And her months were fulfilled, and in the ninth month Anna brought forth. And she said to the midwife: What have I brought forth? and she said: A girl. And said Anna: My soul has been magnified this day. And she laid her down. And the days having been fulfilled, Anna was purified, and gave the breast to the child, and called her name Mary. 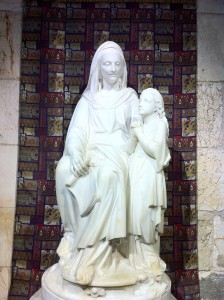 7. And her months were added to the child. And the child was two years old, and Joachim said: Let us take her up to the temple of the Lord, that we may pay the vow that we have vowed, lest perchance the Lord send to us, and our offering be not received. And Anna said: Let us wait for the third year, in order that the child may not seek for father or mother. And Joachim said: So let us wait. And the child was three years old, and Joachim said: Invite the daughters of the Hebrews that are undefiled, and let them take each a lamp, and let them stand with the lamps burning, that the child may not turn back, and her heart be captivated from the temple of the Lord. And they did so until they went up into the temple of the Lord. And the priest received her, and kissed her, and blessed her, saying: The Lord has magnified thy name in all generations. In thee, on the last of the days, the Lord will manifest His redemption to the sons of Israel. And he set her down upon the third step of the altar, and the Lord God sent grace upon her; and she danced with her feet, and all the house of Israel loved her. 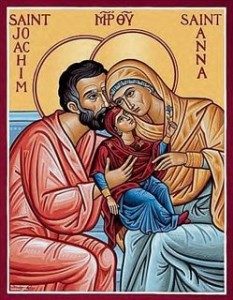 8. And her parents went down marveling, and praising the Lord God, because the child had not turned back. And Mary was in the temple of the Lord as if she were a dove that dwelt there, and she received food from the hand of an angel. And when she was twelve years old there was held a council of the priests, saying: Behold, Mary has reached the age of twelve years in the temple of the Lord. What then shall we do with her, test perchance she defile the sanctuary of the Lord? And they said to the high priest: Thou standest by the altar of the Lord; go in, and pray concerning her; and whatever the Lord shall manifest unto thee, that also will we do. And the high priest went in, taking the robe with the twelve bells into the holy of holies; and he prayed concerning her. And behold an angel of the Lord stood by him, saying unto him: Zacharias, Zacharias, go out and assemble the widowers of the people, and let them bring each his rod; and to whomsoever the Lord shall show a sign, his wife shall she be. And the heralds went out through all the circuit of Judaea, and the trumpet of the Lord sounded, and all ran.