PrevPreviousLast Days of Sts. Peter and Paul in Rome
NextGotta Daughter? You’ll Love This Song! My Story with my 2nd DaughterNext 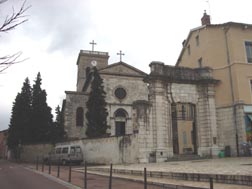 In honor of the feast day of St. Irenaeus today I have reposted a blog from several years ago when we were filming our documentary on Apostolic Fathers, Handing on the Faith. Here is the story…

“We finished getting all our work done in Lyon for St. Irenaeus. It was very cold and windy — with snow hampering our efforts. We shot video footage for our upcoming DVD in the Footprints of God video series. This installment will be entitled APOSTOLIC FATHERS: HANDING ON THE FAITH.

(Click on pictures for larger images. Church of St. Irenaeus with the remains of his bones; the theatre in Lyon where St. Irenaeus’ parishioners where martyred) 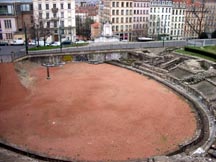 We shot footage at the old and mostly forgotten Church of Irenee on the hillside of Lyons France. Under the church is the tomb of a man that had an incredible influence on me converting to the Catholic Church. Unhappily, in 1527 the Calvinists destroyed his tomb and threw his bones into the river. Only a few fragments remain.

We also found this ancient Roman Amphitheater which was rediscovered only in 1957. You don’t see it now, but in the 2nd century, this arena floor was soaked with the blood of Christians. 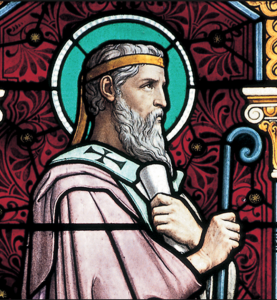 In 177 about 45 of our brothers and sisters in the faith were gruesomely tortured and killed here in front of jeering crowds. A woman named Blandine was publically tortured for two days as the crowds cheered.

The soldiers exhausted themselves with every ingenious torture they could devise. They cut and inflicted and mutilated her naked body for days.

Blandine never caved in. When they jeered “Deny your Christ and live!” she would only say back “I am a Christian!”

(Click on Timeline for a larger copy to print) 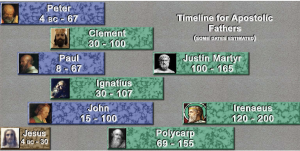 The Christians were placed in a iron chair with a raging fire beneath. The smoke and stench of their burning bodies filled the arena. Yet they never caved in. These Martyrs of Lyons and Vienne were true heroes and champions of the Faith. They wrestled to the death and won crowns of life.

I was extremely moved in this location. You can read the full story in Eusebius’ History of the Church. We are grateful to Eusebius for preserving this story of Christian martyrdom and heroism. Here is our DVD Apostolic Fathers, Handing on the Faith with its 28-page Study Guide. I also have a talk on St. Ireneaus to download as an MP3. 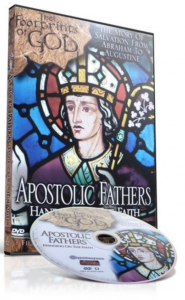