Posted by Edward Pentin on Tuesday Nov 15th, 2016 at 11:25 AM
In an exclusive Register interview, he elaborates about why four cardinals were impelled to seek clarity about the papal exhortation’s controversial elements.
Article main image 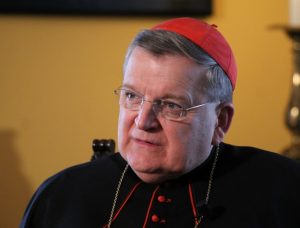 Four cardinals asked Pope Francis five dubia questions, or “doubts,” about the apostolic exhortation Amoris Laetitia (The Joy of Love) in a bid to clear up ambiguities and confusion surrounding the text. On Nov. 14, they went public with their request, after they learned that the Holy Father had decided not to respond to their questions.
In this exclusive interview with the Register, Cardinal Raymond Burke, patron of the Sovereign Military Order of Malta, explains in more detail the cardinals’ aims; why the publication of their letter should be seen as an act of charity, unity and pastoral concern, rather than as a political action; and what the next steps will be, if the Holy Father continues to refuse to respond.
Your Eminence, what do you aim to achieve by this initiative?
The initiative is aimed at one thing only, namely the good of the Church, which, right now, is suffering from a tremendous confusion on at least these five points. There are a number of other questions as well, but these five critical points have to do with irreformable moral principles. So we, as cardinals, judged it our responsibility to request a clarification with regard to these questions, in order to put an end to this spread of confusion that is actually leading people into error.
Are you hearing this concern about confusion a lot?
Everywhere I go I hear it. Priests are divided from one another, priests from bishops, bishops among themselves. There’s a tremendous division that has set in in the Church, and that is not the way of the Church. That is why we settle on these fundamental moral questions which unify us.
Why is Chapter 8 of Amoris Laetitia of such particular concern?
Because it has been the font of all of these confused discussions. Even diocesan directives are confused and in error. We have one set of directives in one diocese; for instance, saying that priests are free in the confessional, if they judge it necessary, to permit a person who is living in an adulterous union and continues to do so to have access to the sacraments — whereas, in another diocese, in accord with what the Church’s practice has always been, a priest is able to grant such permission to those who make the firm purpose of amendment to live chastely within a marriage, namely as brother and sister, and to only receive the sacraments in a place where there would be no question of scandal.
This really has to be addressed. But then there are the further questions in the dubia apart from that particular question of the divorced and remarried, which deal with the term “instrinsic evil,” with the state of sin and with the correct notion of conscience.
For the whole article click here.
Share on facebook
Share
Share on twitter
Tweet
Share on email
Email
Share on print
Print