Another Protestant (Wesleyan) Pastor resigns to Join the Catholic Church 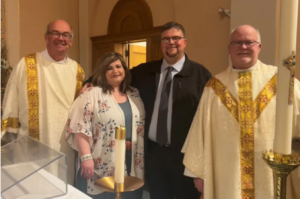 What would drive a Protestant minister to give up his ministry, to wander in spiritual darkness for a time and eventually follow God’s call in a new direction?

For Steve Dow, it was the truths of the Catholic faith that, despite his best efforts, he ultimately couldn’t ignore.

Eventually stepping out in faith and trust in the Lord, he responded to God’s call and was finally welcomed into the Catholic Church during the Easter Vigil, April 16 at St. Patrick Church in O’Neill, Nebraska.

“Like any non-Catholic, especially a minister, it’s a jump into the unknown,” said Father Ross Burkhalter, senior associate pastor of St. Patrick, who helped lead the Rite of Christian Initiation of Adults (RCIA) classes Dow attended.

But Dow was willing to step away from the path he was on and explore with openness what the Church actually teaches, said Father Burkhalter, who also serves Nebraska parishes St. Joseph in Amelia, Sacred Heart in Boyd County, St. Boniface in Stuart and St. Joseph in Atkinson.

As a minister in the Wesleyan Church, which has historic ties to the Methodist Church, Dow’s journey to the Catholic faith began several years ago when he started viewing programs on EWTN (Eternal Word Television Network – a Catholic television network), mostly out of curiosity, he said.