Fr. Tom Smith, from a long line of Mormons back to Joseph Smith, tells why he converted to the Catholic Church. Read it HERE

A friend wrote about Mormons below:

I was doing a little shopping that day. Since I was in the neighborhood of a friend, I thought, I will stop by for a little visit. When I rang the doorbell, she came to the door and appeared unusually welcoming.

I walked in and off to my left I saw a couple of suits sitting in the living room and I’m thinking, oh boy, the Mormons are here. I was hungry and I wasn’t in a Mormon talking mood! And so I mentioned that I couldn’t stay long I was just stopping by and I was on my way to get something to eat. I didn’t know anything about Mormons; I was just trying to get out of there.

It is kind of like the Jonah and the whale thing, God was calling me one way and I was trying to go another. No, I was not swallowed by a whale! How could I, she wouldn’t let me out of the house. She said; “I have some nice warm rolls for you!” 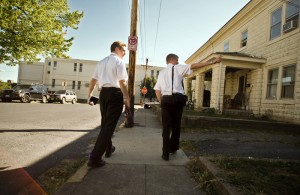 So anyway, now I am sitting in her living room. One Mormon was sitting on the couch and the other was sitting on the floor. I asked them who was they’re founder? They said, Joseph Smith. I asked them, when was their church founded and they told me 1830. I then asked them what happened to the church between the death of last Apostle and 1830 when your church was founded. They said that the church had apostatized and there was no true Church in all of those centuries.

This came as a surprise to me because I had never heard anyone say there was no true church lasting for centuries, up to the point of the foundation of their particular Church. I mentioned to them that it was Jesus who said, the gates of hell would not prevail against the Church. “And so I say to you, you are Peter, and upon this rock I will build my Church and THE GATES OF THE NETHER WORLD WILL NOT PREVAIL AGAINST IT. I will give you the keys to the Kingdom of Heaven. Whatever you bind on earth shall be bound in Heaven, and whatever you loose on earth shall be loosed in Heaven” (Mt. 16:18-19).

If the Church had apostatized and there was no one true Church for all those centuries then the Bible was wrong. This would mean that the gates of hell did prevail against the Church and Jesus is either a liar or sadly mistaken and that I could not accept either of these scenarios. So then I asked them, what they had to say about this. The Mormon sitting on the floor looked up at the other and said; “You can answer this one!” Of course they didn’t have an answer. Afterward my friend admitted she had said a prayer that I would show up.

The point is this; there has to be ONE true Church established by Jesus Christ in every century or the gates of Hell did prevail against it, in those centuries and the Bible and Jesus are wrong.

In the Apostles Creed it says; “I believe in ONE holy catholic and Apostolic Church.” This is the same creed that is said in Catholic, Lutheran and some other Protestant Churches. But, was the Church really ONE as we say in the Apostles Creed? Or was the Church an abstract invisible reality that embraces a multitude of contradictory theologies? What does the Bible say?

Jesus said; “May they all be ONE, just as, Father, you are in me and I am in you, so that they also may be in us, so that the world may believe it was you who sent me. I have given them the glory you gave to me, that they may be ONE as we are ONE. With me in them and you in me, may they be so perfected in UNITY that the world will recognize that it was you who sent me and that you have loved them as you have loved me” (Jn 17:21:23).

The Apostle Paul said; “Take every care to preserve the UNITY of the Spirit by the peace that binds you together. There is ONE Body, ONE Spirit, just as ONE hope is the goal of your calling by God. There is ONE Lord, ONE faith, ONE baptism, and ONE God and Father of all, over all, through all and within all” (Eph 4:3-6).