How Many Churches Did Jesus Intend?

“I am praying not only for these disciples but also for all who will ever believe in me because of their testimony. My prayer for all of them is that they will be one, just as you and I are one, Father… so they will be in us, and the world will believe you sent me” (John 17:20-21, NLT Bible)

On the night before He died, Jesus earnestly prayed to His Father to keep all His future believers one and united. It is a must if the whole world is to believe in Him. 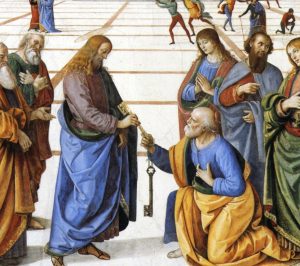 That is why Jesus established only one church in 30 AD with Peter as first Pope. Jesus said, “You are Peter, and on this rock I will build my church, and the powers of death shall not prevail against it. I will give you the keys of the kingdom of heaven, and whatever you bind on earth shall be bound in heaven, and whatever you loose on earth shall be loosed in heaven.” (Matthew 16-18-19)

Division causes confusion and weakness as proven by Paul to his advantage in the First Reading. He successfully sowed confusion between the Pharisee and Sadducee sects of Judaism over their division on the theology of life after death, thus he evaded their joint wrath for teaching about Jesus Christ.

With this in mind, in 50 AD (long before the Church complied the New Testament in 400 AD), Paul emphasized to his converts the importance of the continuity of tradition to keep the Church united. “So then, brethren, stand firm and hold to the traditions which you were taught by us, either by word of mouth or by letter.” (2 Thessalonians. 2:15)

Even as the last Gospel (the Gospel of John) was being written between 90-110 AD, the Church was already called Catholic, meaning universal or worldwide. In 107 AD, Bishop Ignatius of Antioch wrote to the Christians in Smyrna (modern-day Izmir, Turkey), “Wherever Jesus Christ is, there is the Catholic Church.” (Wikipedia Encyclopedia, https://en.wikipedia.org/wiki/Catholic_(term))

It is very poignant that it was in Antioch where Ignatius was Bishop, where the believers of Christ was first called Christians (Acts 11:26).

Elsewhere, we find these written confirmations in secular encyclopedias:

“St. Peter, of Bethsaida in Galilee, From Christ he received the name of Cepha, an Aramaic name which means rock .Prince of the Apostles, w 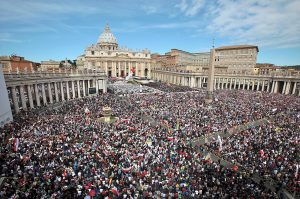 as the first pope of the Roman Catholic Church. He lived first in Antioch and then in Rome for 25 years. In 64 or 67 AD, he was martyred. St. Linus became the second pope.” (National Almanac, ©1996)

“ROMAN CATHOLICISM The largest of the Christian denominations is the Roman Catholic church. As an institution it has existed since the 1st century AD… the Roman church owes its existence to the life of Jesus Christ in the 1st century AD” (Comptons Encyclopedia, ©1995)

“Roman Catholic authority rests upon a mandate that is traced to the action of Jesus Christ himself, when he invested Peter and, through Peter, his successors with the power of the keys in the church. Christ is the invisible head of his church, and by his authority the pope is the visible head.” (Encyclopedia Britannica, ©1999)

“Roman Catholicism Christian church characterized by its uniform, highly developed doctrinal and organizational structure that traces its history to the Apostles of Jesus Christ in the 1st century AD.” (Encyclopedia Britannica, ©1999)

We Catholics are proud that our Church is the true one – AND RIGHTLY SO! And we love to hear the proof of it. But do we show the same love for her teachings? If she is the right one, do we stand with her against contraception, abortion, divorce and same-sex ‘marriage’? Do we follow her advice in choosing the morality of leaders who will run our country and help build the Kingdom of Jesus Christ?

Pentecost was when the Holy Spirit descended from the Father and the Son upon Mary and the Apostles, thus giving life to the Church. As our birthday gift to our Mother Church, let us give her and her Bridegroom Jesus Christ the gift of our obedience and unity.

From Word Today in the Philippines https://www.facebook.com/CatholicMassReflections