Traveling with Paul, John & Mary in Biblical Times was TOUGH!

Jostling through the crowds Paul and Luke pushed their way to the ramp. The wooden cargo ship was ready to leave Caesarea and they had gathered the last of their supplies. They pressed the silver denarii into the hands of the sailer at the dock. They were allowed onto the ship.

They rushed to the far side of the salty deck to claim their few square feet of living space where they would live, sleep and eat for the next seven days. The set up a leather tent covering, put their blankets under the tarp and stashed their food and meager supplies in the corner. They were ready to go! 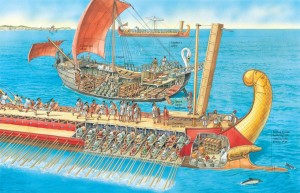 Traveling by ship in the first century was rugged and grueling. Ships did not have cabins for travelers. They purchased space on the deck — the lower part of the ship was for the huge cargos, usually grain from Egypt, marble from Greece or lumber from Lebanon.

However, this was certainly the quickest way to get through the Roman Empire by voyaging the shipping lanes of the Mediterranean Sea. Even though Rome had built over 250,000 miles of primary roads the time and labor to walk around the sea was rugged, dangerous and timely.

How do you think Mary traveled from Israel (Judea) to Ephesus with St. John? It would have been almost impossible to travel by land so she must have suffered much on the deck of one of these cargo ships. Mary was tough! 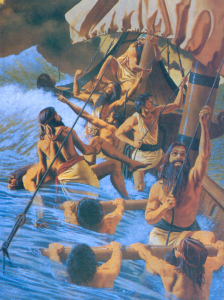 Ships were not reliable like the luxurious cruise ships today where pilgrims sip a glass of wine on the deck looking out over the waves only imagining the grueling voyage of St. Paul and the other early Christians. To get a sense of this rugged reality we suggest our pilgrims go out on the deck of our cruise ship in the middle of a windy wavy night. Imagining living on the deck of the ship, covered with the salty spray and using the side of the ship for a toilet is not the way modern people would want to travel.

Even though we can only use our imagination to “experience” the travels of St. Paul as he spread the Gospel around the Mediterranean, our pilgrims traveling with us through the Great Sea of biblical times still get to walk in Paul’s footprints through the cities he walked. We even walk on the actual roads with the stones laid over 2,000 year ago. 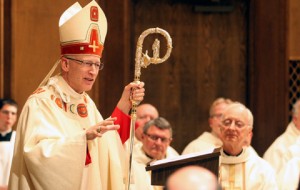 The names of these cities will be familiar to everyone — Athens, Corinth, Ephesus, Philippi, Thessaloniki and many more. 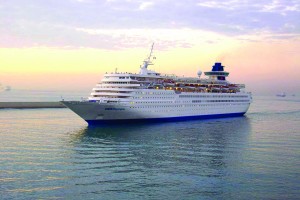 We will study what he said and did in each site as well as celebrate Mass in the most amazing locations. Some of the Masses will be set in local cathedrals while others outdoors in historic locations mentioned in the Bible.

Our Seminar at Sea will provide pilgrims with spiritual talks on St. Paul, Evangelism and the Family. This is a cruise, a pilgrimage, a seminar—and a biblical adventure. Steve arranged the itinerary with the cruise company to visit only biblical, early Catholic sites. You will have time to explore and pray in eight locations deeply rich with our Catholic heritage.

You will visit the cities where St. Paul wrote his inspired letters and other cities to which they were written. You will walk the same roads, sit in ancient theaters where he taught, discover how true and accurate the Bible is, and draw closer to Our Lord.

But Paul is not the only saint we will discover. The Apostle St. John was the bishop of Ephesus and we will pray at his tomb. Mary lived for a while in Ephesus with St. John and we will have Mass at Mary’s House. St. John was exiled on the Greek Island of Patmos because of his testimony to Jesus.

We will stop at this beautiful Greek Island to celebrate Mass at the cave where St. John lived and where he received the profound revelation which became the last book on the New Testament. From here he also saw the heavenly vision of Mary, the Queen of Heaven (Rev 12:1).

It is not too late to join us.  For those who want to join our post-cruise extension to Rome, we will tour the most important sites in the Eternal City too.