The Eucharist and the Fathers of the Church: Article by Steve Ray

The Eucharist and the Fathers of the Church, by Steve Ray

The word “Eucharist” was used early in the Church to describe the Body and Blood of Christ under the forms of bread and wine. Eucharist comes from the Greek word for “thanks” (eucharistia), describing Christ’s actions: “And when he had given thanks, he broke it, and said, ‘This is my body which is for you’.” From the first century the Apostolic Fathers referred to this Blessed Sacrament as the Eucharist, emphasizing that it was both the Real Presence of the Lord Jesus Christ and the Sacrifice of the New Covenant. 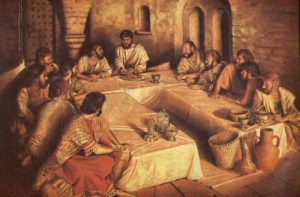 Our Lord taught the Apostles the meaning and liturgical form of the Eucharist and the apostles in turn passed the tradition on to the early Church. Many Christian sects deny apostolic tradition and attempt to derive details of the sacrament from the Bible alone.

However, the NT was never intended as a manual with detailed sacramental instructions—the Blessed Sacrament was learned by apostolic instruction and the faithful transmission of that tradition through the bishops. The final canon of Scripture was not recognized for almost four centuries after Christ, yet the Christians faithfully celebrated the Eucharist as taught by the apostolic tradition deposited in the Church.

Confusion about the Eucharist abounds in non-Catholic Christian circles. But, for the first twelve or thirteen centuries, with the exceptions of Ratramnus (d. ad 868) and Berengarius (d. 1088), both of whom affirmed the Real Presence in the end, there was a universal understanding and a consistent practice of the Eucharist throughout the Church, but only fifty years after Martin Luther nailed his 95 Theses to the Wittenberg church door there was a book published entitled Two Hundred Definitions of the Words ‘This is My Body’. The Fathers of the Church knew no such confusion.

One of the earliest usages of the word Eucharist is in the Didache which was written as early as ad 60—before many NT writings. In the Didache we read: “Assemble on the Lord’s Day, and break bread and offer the Eucharist; but first make confession of your faults, so that your sacrifice may be a pure one” (Didache 14). In the fourth century, St. Athanasius used the Didache as a catechetical text for his students.

Malachi’s prophecy helps understand the Fathers’ grasp of the Eucharist. St. Paul uses Malachi’s technical term “the table of the Lord” in 1 Corinthians 10:21. Referring to the “table of the Lord”, used in the context (Malachi 1: 7, 12), the prophet Malachi wrote, “For from the rising of the sun even unto the going down of the same my name shall be great among the Gentiles; and in every place incense shall be offered unto my name, and a pure offering: for my name shall be great among the heathen, saith the Lord of hosts” (KJV). 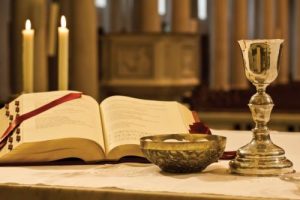 This reference to “a pure offering” offered on “the table of the Lord” was interpreted repeatedly by the Fathers, from the first century onward, as a reference to the Eucharist. Even the Didache alludes to Malachi: “For this is the offering of which the Lord has said, ‘Everywhere and always bring me a sacrifice that is undefiled, for I am a great king, says the Lord, and my name is the wonder of nations’” (Didache 14).

Clement of Rome (AD 96), a fellow-worker with the Apostles, relates the new priesthood to that of the Old Testament Levites, emphasizing the distinction between the service of the priest and the laity: “In the same way, my brothers, when we offer our own Eucharist to God, each one should keep to his own degree (calling)” (Letter of Clement to the Corinthians, 41).

St. Ignatius of Antioch (d. c. 106), another associate of the Apostles, wrote of “one common Eucharist; for there is but one Body of our Lord Jesus Christ, and but one cup of union with His Blood, and one single altar of sacrifice” (Epistles to the Philippians, 4). St. Justin Martyr (c. 100-c. 165) cites Malachi 1:11:  “[God] then speaks to those Gentiles, namely us, who in every place offer sacrifices to Him, i.e., the bread of the Eucharist, and also the cup of the Eucharist” (Dialog with Trypho the Jew, 14).

St. Ignatius of Antioch, though writing around ad 106, clearly represents the theology of the first century. He warns, “But look at those men who have those perverted notions about the grace of Jesus Christ which has come down to us, and see how contrary to the mind of God they are . . . . They even abstain from the Eucharist and the public prayer, because they will not admit that the Eucharist is the self-same body of our Savior Jesus Christ, which [flesh] suffered for our sins, and which the Father in His goodness raised up again” (Epistle to the Smyrnaeans 6, 7).

St. Ignatius speaks nobly of the Eucharist: “Share in one common breaking of bread—the medicine of immortality, and the sovereign remedy by which we escape death and live in Jesus Christ evermore” (Epistle to the Ephesians, 20). 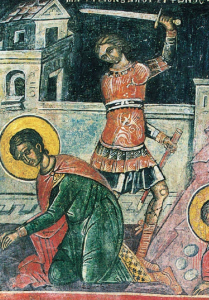 The Catholic Mass continues the theology and liturgy of the first centuries. St. Justin Martyr offers a glimpse of the Eucharistic sacrifice in the mid-second century. “And this food is called among us Eucaristia [the Eucharist], of which no one is allowed to partake but the man who believes that the things which we teach are true, and who has been washed with the washing that is for the remission of sins, and unto regeneration, and who is so living as Christ has enjoined. For not as common bread and common drink do we receive these; but in like manner as Jesus Christ our Savior, having been made flesh by the Word of God, had both flesh and blood for our salvation, so likewise have we been taught that the food which is blessed by the prayer of His word, and from which our blood and flesh by transmutation are nourished, is the flesh and blood of that Jesus who was made flesh” (First Apology, 1, 62).

The word “Transubstantiation” was commonly used in the 12th century and given classical formulation by St. Thomas Aquinas in the 13th. Though the early Fathers did not use this exact terminology, the teaching was essential to their theology. The Fathers unanimously held to the Real Presence of Christ in the Eucharist.

Some Protestants (e.g., William Webster, The Church of Rome at the Bar of History) tend to approach the Church Fathers in one of two ways. First, they may just ignore or disregard the Fathers as “uninspired” or irrelevant—why study the Fathers when we have the Bible? Second, they may search for perceived contradictions. The perceived contradiction is then presented as a false dilemma. This false dilemma forces an either/or dichotomy.

If the Real Presence was an illicit teaching or unorthodox teaching we would expect to find early orthodox Christians condemning it? Instead, we see the earliest and most respected Christians consistently promoting both the sacrificial nature of the Eucharist and the reality of the Real Presence. Never is this teaching condemned or forbidden. The Catholic doctrine is the result of the organic development of the doctrine taught by the apostles and faithfully preserved by the bishops in the apostolic succession.

However, the Fundamentalists fail to disclose that St. Augustine taught that “[Jesus] took flesh from the flesh of Mary. He walked here in the same flesh, and gave us the same flesh to be eaten unto salvation. But no one eats that flesh unless he adores it” (Sermon 174, 7). St. Augustine certainly does not see any contradiction; in fact, his teaching is foundational to the dogmas of the Catholic Church.

With glorious harmony, the Fathers of the Church proclaimed the Real Presence of Christ in the Sacrifice of the Altar. Opposition was virtually nonexistent until the dawn of the Protestant Reformation. The confusion began with the Reformers, who could form no doctrinal consensus on the Eucharist.

At the Marburg Conference in 1529 they were sharply divided and departed the conference in utter disarray. In contrast, the Catholic Church has maintained unity and the fullness of the apostolic teaching by unabashedly proclaiming for two thousand years that the Eucharist is the Body and Blood of Christ. St. John Chrysostom (c. 347–407) writes, “This is the Body which He gave us, both to hold in reserve and to eat” (Homily on 1 Cor 24, 4).

St. Cyril of Alexandria (c. 376?444) concurs, “[Jesus] states demonstratively: ‘This is My Body,’ and ‘This is My Blood,’ lest you might suppose the things that are seen are a figure. Rather, by some secret of the all-powerful God the things seen are transformed into the Body and Blood of Christ, truly offered in a sacrifice in which we, as participants, receive the life-giving and sanctifying power of Christ” (Commentary on Matthew, 26:27).